The Poor and Famous Boys Culture Club held an all-day sporting activity on Sunday February 10th. Events at the Boca Del Rio park included sporting activities such as running races, sack races and lime & spoon races for children aged seven through 17. Over 40 island children spent their morning at the park, enjoying the sporting activities outlined for them.

Because of the number of children who showed up for the games, organizers had to create two categories: Under 14 and Under 17. The race saw enthusiastic competitors racing from the Boca del Rio Park to the Phoenix beachfront and then back to the park, an approximate distance of one mile. Competing in this race were a total of 22 kids; 13 in the Under 14 and 9 in the Under 17. In the U14 race, 10 medals were given to the top ten runners along with gift certificates. 11 year old Dixon Paguada of San Pedro RC School took first place. In second place was 13 year old Johanne Guerrero of New Horizon Academy and in third place was 12 year old Jason Barrientos of San Pedro RC School. Topping the Under 17 category were 14 year old Kian Ancona followed by 14 year old Byron Lara and 17 year old Alex Pineda. They each took home gift certificates.

After the scheduled races were over, the remaining children competed in fun filled races such as the ever popular sack race and the old-school lime and spoon. The younger children especially enjoyed these races, which provided ample fun and excitement to their Sunday morning.

According to organizer Larry Sutherland, the event was quite the success. “Much more kids came out than we expected. The kids were very excited about what we are doing. Obviously the news is getting out there. This time around, we even had some volunteers that came out to help. A couple things we noticed during the event: one, there were two kids that should have been in school but aren’t. We have spoken to some individuals who have committed to sponsoring both kids. See, the problem isn’t that the kids DON’T want to go to school; it’s just that their parents can’t afford it. So, through our efforts we were able to get sponsors for these kids. At all our events, we encourage the kids to stay in school and offer them that added support to assist in their success, from which the benefits eventually trickles down back into the society – when these kids become educated, responsible, ambitious adults in the next 5 – 10 years.” 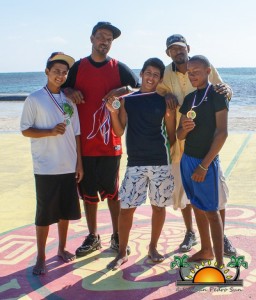 The Poor and Famous Culture Club is a country-wide program that helps facilitate youth interaction. This program also teaches discipline, healthy morals in life and dedication. The club is dedicated to providing youth with experiences, activities and friendships that will help them to grow up to be the best they can be. Already in the planning phase are two activities. On February 23rd the group is planning an Under-17 bicycle race. This will be followed by a kite making workshop and contest in early March. For more information on the Poor and Famous Culture Club and the various activities they organize or how YOU can donate or assist, contact Director/Coordinator Larry Sutherland at telephone number 626-5393. Visit their website http://www.poorandfamous.bz/ to find more information.