Twenty young sailors from Belize City, Placencia, and San Pedro skippered dinghies for two days in ideal waters and conditions off Banyan Bay Resort during the thrilling Lobster Fest Regatta on June 22nd and 23rd. For some of the youth, this was their very first regatta.
The regatta consisted of the young sailors taking turns in the ten boats available. Each participant raced six times. The course was an Olympic triangle that allowed spectators to clearly see, understand, and enjoy the action.

The first leg of the regatta started on the morning of Saturday, June 22nd. It began with getting to know all about crocodiles and meeting an adult live croc up close and personal, courtesy of American Crocodile Education Sanctuary (ACES). That was followed by a discussion by the experts from Belize Shark Project on shark behavior and conservation. They also provided free and expert shark face-painting for the rest of the day, all while answering questions. 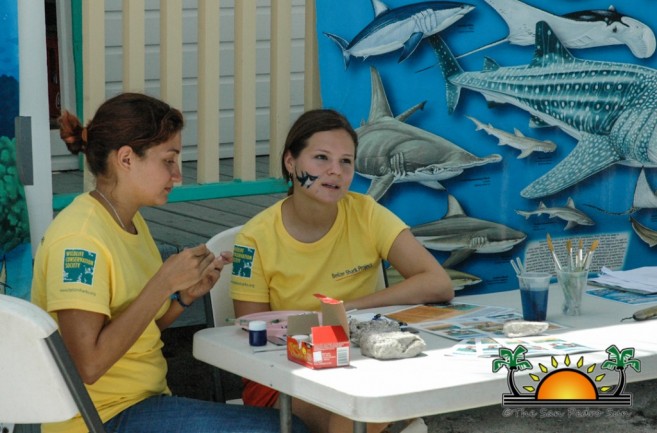 After the presentations, the sailors were divided into two fleets of ten. Each fleet raced four times. From the results, the top ten sailors were selected to participate in the finals; however, the other 10 were far from done. On Sunday they raced against each other in a second race, runner-up series. The top three were Tyler Garbutt of Placencia, Davin Puc of San Pedro, and Carlos Villatoro of Placencia.

The top ten took to the boats for their two final races. Faith Noel of San Pedro, who had sizzled to the top of Saturday’s leader board with one first and three second place finishes, looked to be continuing her dominance; however, Jerdon Anderson of San Pedro and the Sea Scouts’ Trent Hardwick would not let her break free of their pursuit. Both Jerdon and Trent had taken a first away from Faith on Saturday, and in this race, the lead changed among these leaders several times. Faith rounded the final mark ahead of Jerdon and Trent. Riding white-capped swells on the run to the finish, Jerdon, not Trent, appeared to be the threat. Then, somehow, Trent, from behind and to the right of the two leaders maneuvered between them, but still behind. Suddenly and barely 15 yards from the finish line, the crest of a wave caught Trent’s boat. He mounted the crest between his two rivals and surfed it to a stunning last instant victory. The wave deposited him across the line barely a second ahead of Faith and maybe a half second more ahead of Jerdon.

Trent’s third place in the next race was sufficient to reward him with the regatta’s first Place plaque. Kevin Velasquez’ fourth and first place finishes secured second place in the regatta, and Jerdon Anderson placed third, after a fifth place finish in the second race.
Faith Noel entered the last race after sailing to four second place and one first place. For that consistency Faith was tops without an equal but she had by then truly and valiantly left it all – all she had on the water. Her no doubt exhausted seventh place finish in the last race dropped her to fourth in the regatta. 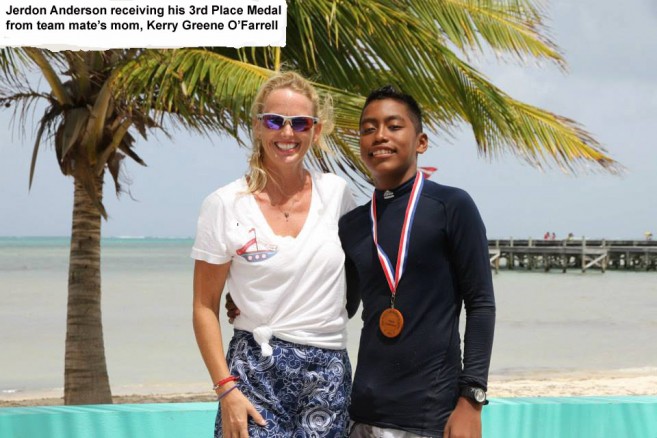 There were many winners in this regatta. The Belize Sea Scouts presented their Award for Sportsmanship during the 2013 San Pedro Lobster Fest Regatta to San Pedro’s Mitchell Sersland. They particularly noted Mitch’s willingness to help others, and eagerness to cheer them up, too. Out of the twenty sailors in the regatta, no fewer than eight different skippers sailed themselves to at least one first place victory. Three others sailed to at least one second Place finish, and four more sailors, different ones from those above, took a third place at least once. So, no less than 15 of the 20 sailors in San Pedro’s regatta enjoyed a place in the winners’ circle at least once. That speaks to the spirit of this particular regatta, and to its degree of success. Congratulations to all the sailors who came, and for the way they handled themselves on and off the water.

Belize Mission Project is back in Belize15 Photos