A group of four students from Montreal, Canada are on Ambergris Caye hosting a summer camp for local children of San Pedro Town. The summer camp was facilitated by Matachica Resort and Spa located on northern Ambergris Caye and was the vision of 17 year old Nicholas Lighter. The summer camp, which is in its second week, will run for a total of four weeks (through the end of July).

According to Lighter, he sought help from three of his friends: Eric Drymer, Max Rabinovitch , and Jonathan Garfinkle, all from Montreal. The four students had one thing in common – all wanted to do something positive during the summer – and so they decided that a Children’s camp in Belize would be good. “I was thinking about what to do this summer. In Montreal there are a lot of opportunities to work at different summer camps as well as in the United States and other parts of Canada. I wanted to do something different and I spoke to my father. He owns Matachica Resort on Ambergris Caye and so I was discussing it with him. He told me that he has seen, over his years here during the summer, kids walking around not making any use of their time. We thought that a camp would be very useful for the kids. This will allow them to have something to do over summer. My dad thought I would be a perfect candidate to make the camp happen because I have friends who were also looking for something to do. With help of my friends and the assistance of the staff at Matachica Resort, we arranged the camp.” In addition to his Canadian friends, Ismael Figueroa of San Pedro Town is also assisting him. 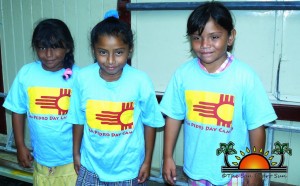 While Lighter has frequent the island along with his family, his three friends were new to La Isla Bonita. But that did not stop the four classmates from coming together to fundraise and organize San Pedro Day Camp. According to Drymer, they approached friends and local stores in Montreal for donations. They also created flyers with pictures that had their mission statement and a list of equipment needed for the camp. “We reached out to a couple of local businesses (in Montreal) that provided things like the T-shirts and other materials that we needed to make this camp run. They did not really know about San Pedro Town but they certainly knew about Belize. When we explained to them what we were trying to do here, they were very receptive and they were very willing to help. It was very nice of them,” said an excited Drymer. The four students’ efforts raised a total of $3600 US for the camp, and they were able to cover all expenses for the program, including free camp T-shirts, daily snacks, games, sports equipment plus arts and crafts supplies. 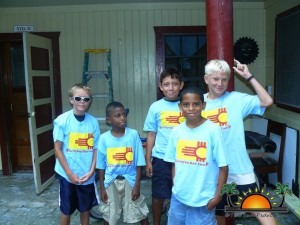 “It makes us feel lucky because we are helping people and we’re also having a good time doing it. So it’s just a great way to spend the summer and it has been a great experience so far,” explained Lighter. For his part Drymer said it feels good spending time with the children of Belize. “It is rewarding for me. The experience changes every day. The kids are great; they listen as much as you could expect any group of children to do. So it is a lot of fun and we’re having a great time here.”

The camp offers daily activities such as swimming, football, volleyball, dodge ball, beach games, treasure hunts, snorkeling, board games, and arts and crafts. The camp is based at Isla Bonita Elementary School and weekly hosts an average of about 50 children, ages five to 13 years.

According to sister properties Matachica Resort and Spa and GAÏA Riverlodge, they are proud to assist in bringing this vision to fruition. Nicholas hopes that he is able to share his time and efforts annually with the children of Ambergris Caye. The San Pedro Sun is proud of Nicholas and friends; hats off for pulling this camp through.

Repairs on the Sir Barry Bowen Bridge have begun7 Photos