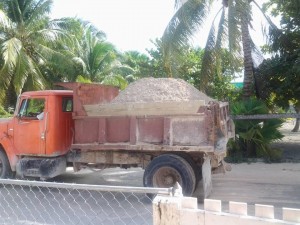 Residents of Caye Caulker are up in arms after a private sand company was observed to be barging off sand to Ambergris Caye. The residents are claiming that the streets in Caye Caulker are in the worst state it has ever been and that the sand is being barged off the island should instead be used to fix their streets. Frustrated residents claim that since June, villagers have been unable to see or hear from their Area Residents Honorable Manuel Heredia to have the street issues on the island addressed.
The San Pedro Sun understands that the private sand company on Caye Caulker belongs to Damien Chamberlain, and Belize Marine and Sand does the dredging. The dredging/mining permit is in the name of the Caye Caulker Village Council (CCVC) which was confirmed by Village Chairman Wayne Miller. The Chairman said that while the complaints by the residents are legitimate, the fact is that the sand belongs to a private company. “Under the mining permit, the agreement is that we are paid for the use of our permit, since it belongs to CCVC and we also get 10% of the material dredged. I must say that we are paid for the use of the permit and we are getting far beyond the 10% of the material dredged,” said Miller.
When questioned why the trucks brought on the island to transport the material are not paying the $500 fee as required by the village council, Miller said that the fee was waived. “The sand is being used for a Belize Tourism Board Project in San Pedro Town. We believe that in good gesture to the BTB, we would to waive the fee,” said Miller. The decision was made because in 2014, BTB will be implementing a project to enhance the beach on Caye Caulker.

Chairman Miller was also questioned about the conditions of the street and the high level of frustration by the residents. “We understand their concerns about the street condition. But if truth is told, just last week we fixed two of the main streets and the rain came down and washed away the sand. The issue is not sand because have sand to fix the streets, the issue is the weather. We fix the streets and two days after, the rain comes and washes away the material and we end up with the same problem. Unless we have a comprehensive plan where drainage and so forth are put in place, we will continue to be patching and fixing our streets all year round,” he commented.

Residents reiterated that the Caye Caulker issues affecting the island have gone unattended by the Area Representative, who has not been seen since June. “The residents are true in saying that I have not been on Caye Caulker since June. But what is important is that I continue to meet the needs of the islanders. For instance, just this month 65 new leases will be issued to residents in the area. Cabinet has approved over $80,000 in road infrastructure for Caye Caulker and that will be done as soon as weather permits. So even if I am not physically there, I am ensuring that the needs are being met,” said Heredia. Minister Heredia made no apology for investing more on Ambergris Caye and explained that San Pedro Town is by far, a larger community than Caye Caulker.
The materials that are being barged off from Caye Caulker are being used to complete the Saca Chispas project in San Pedro Town.