On Sunday July 20th at 11:00p.m., police visited the residence of Juan Menjivar located in the San Pedrito area of San Pedro Town investigating a shooting incident which had allegedly occurred on Saturday July 19th in the DFC area of San Pedro. At the house, police met a 15-year-old male of Hispanic descent of San Pedrito area and 30-year-old Juan Menjivar who produced his licensed black 9 millimeter SIG SAUER SP 2022 with eight 9mm live rounds in the magazine. Further searches of the house led to the discovery of over $10,000.00 in US and Belize currency, eight (8) liters of Hennessy and 3 brown parcels containing 1,413 grams of cannabis.

On Monday July 21st at 2:00p.m. police arrested and charged 30-year-old Juan Menjivar, Belizean taxi man of San Pedrito area and a 15-year-old male of San Pedrito area for the crimes of Drug Trafficking to wit: 1,413 grams of cannabis. Menjivar was additionally charged with Discharging a Firearm in Public, Uncustomed Goods and for the possession of over $10,000.00 believed to be the proceeds of Drug Trafficking. 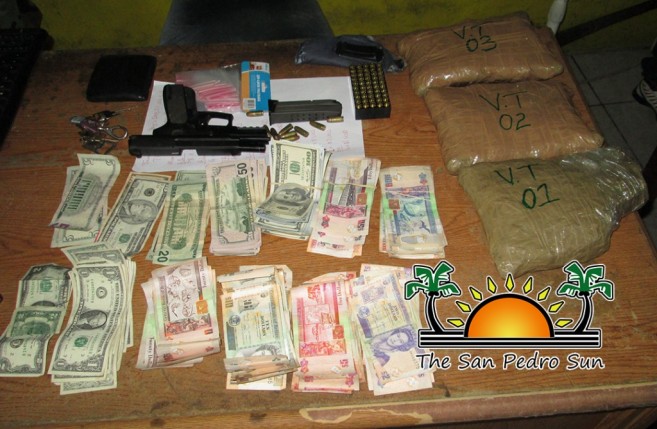