A Belizean and a Cuban national have been remanded to prison following a large drug bust on Wednesday August 20th. They are 52-year-old Pascual Terrero Pineda of a Boca del Rio address in San Pedro Town and 49-year-old Ruperto Eulalio Reyes of Sittee River Street in Orange Walk Town. The duo was found with over 120 pounds of Crystal Meth (methamphetamine) during an anti-drug operation in the Orange Walk District.

According to Belize Police, members of the Anti-Drug Unit were on an operation on August 20th when they intercepted a vehicle sometime around 7:20PM. The vehicle, a black Toyota Camry with License plates OW-C-00623, was observed swaying across the street. That drew the attention of police and when the law enforcement agents went closer, the driver sped off heading onto the Phillip Goldson Highway in the direction of Liberty Avenue. Police managed to stop the vehicle and apprehend the two individuals, one of which was the driver. 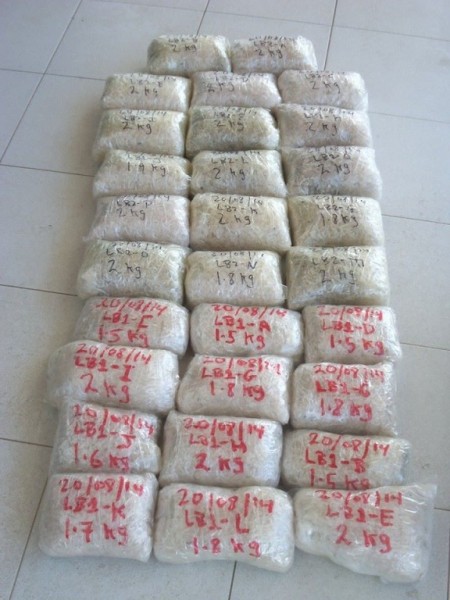 A search of the trunk of the car resulted in the discovery of a red “cooler box” with 18 parcels of suspected meth and a soap powder box with 12 additional parcels of suspected meth, all to a total weight of 54.7 kilogram (120 pounds). Pineda and Reyes, along with the suspected drugs and vehicle, were escorted to the Orange Walk Police Station for processing. The suspected drugs were later confirmed to be Crystal Meth, with a street value of over $4 million.

Both men were arrested and charged with one count each of “trafficking a class B drug.” They were arraigned at the Orange Walk Magistrate Court shortly after 4PM on Friday August 22nd and since the case is indictable, no plea was taken. Pineda and Reyes were remanded to the Belize Central Prison until their next court appearance on September 30th.

It is interesting to note is that while Belize Police claim the street value of the highly addictive drug would have a street value of Belize $4 million, US document shows that the same amount of Crystal Meth would be valued at US $12 million.