One island family is upset after Belize Forest Department Officers confiscated their pet birds on Wednesday, July 30th. The Forestry officers were on the island to host a seminar on wild life laws in Belize and to educate people on the legal procedures of keeping pet birds. The Halliday family believes that their pet birds, a Moluccan Cockatoo and a Miligold Macaw, were confiscated without proper reason and the forceful execution of the confiscation was unnecessary. According to Belize Forest Officer Victoria Cawich, the birds were confiscated because such exotic species need proof of importation, which the Hallidays could not produce when the operation was executed.
Cawich and Belize Bird Rescue Manager CeleshiaTuy were on the island as part of a presentation that was supposed to be hosted at the Lions Den on Wednesday night. The presentation was aimed to enlighten islanders on the wildlife laws of Belize, and the importance of the law to pet owners of captive wildlife, especially parrots. Owners of captive parrots were encouraged to attend the evening event in order to register and license their parrots, and to avoid confiscation once the amnesty period for licensing captive parrots ends on December 31, 2014. But the presentation never occurred due to the delay of confiscating the Hallidays’ exotic pet birds, whichcaused havoc and required police intervention.

Cawich learned of the birds’captivity while touring the island and visiting families with captive parrots. The forestry officer claims that she visited the Halliday residence and spoke to Brain Hallidayin an attempt to request information as it relates to the two captive birds. Cawich claims that she was refused entry on to the Hallidays’ property and was met with resistance, and as such requested police assistance to visit the home at around 6:20PM on the day of Wednesday, July 30th. Cawich asked Hallidayin front of the police if the family had documentation on the origin of the birds, which he did not have. Cawich then informed Halliday that she would be confiscating the birds until the family could provide proof that the birds were legally brought in to the country. Holiday refused to allow Cawich to confiscate the birds, and as a result he was forcefully arrested by the San Pedro Police. The birds were confiscated from the family and transported to a rehabilitation facility at the Belize Bird Rescue (BBR) Center on Thursday, July 31st.
According to Cawich, the birds were confiscated because under the Wildlife Act of Belize,Chapter 220,‘owners of captive birds that are not native to Belize must have proper proof of legal entry to the country’. “The two birds that were confiscated did have markers indicating that they originally came from a pet shop or legal breeding sanctuary, and the family could not provide us with documentation that the birds were brought into the country legally. An import or export permit could have told us the birds’ age and where they came from. This is very important information to know, because these species of birds are usually poached and smuggled into other countries,” said Cawich.

The actual owner of the birds, EduardoHalliday, claims that he has had the birds for over 20 years and that they were given to him by friends. “Keppi, which is the macaw is a cross bred. Keppi has been with me over 20 years. Keppi was being handled by a German guy called Herman the German. Herman says Eddie, you take that bird, he doesn’t act like that with me, he obviously loves you, and so you keep that bird. Gabby, the cockatoo was left with me by the owner Robert Vogues,” said Mr. Halliday. “I just believe that the way that they handled the situation was forceful, we were planning on registering the birds at the seminar. The forestry officer has said in the morning show that they were not here to confiscate any parrots, yet they confiscated mine.” 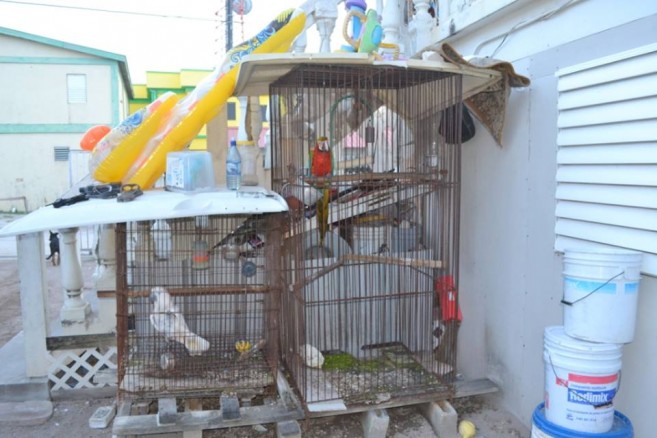 According to Cawich, the cage in which the birds were housed in had no ample space for the birds, was messy and the wire was beginning to get corroded, which could lead to predators entering the cage and hurting the birds. The cockatoo also seemed to be suffering from stress. “The birds seemed to be in good condition, but we did observe that the cockatoo was flipping around the bar he was perched over and over, he was also plucking off his tummy feathers. These are signs that the bird is under stress, which can lead to serious health issues,” said Cawich. The birds will be treated while at the rehab facility, and returned if proper import or export permits are shown. “We do not want to take away the birds from their family, but the law states that these exotic birds cannot be kept as pets without proof that they entered the country legally. Mr. Halliday has to show us documentation that proves that the cockatoo was not poached and was legally sold as a pet, but he still has not produced papers proving that the bird was brought into Belize legally. Once we receive those documents, we will give back the birds,” said Cawich.
As to the forceful arrest of Mr. Halliday’s son, Officer in Charge of Police Luis Castellanos explained that it was necessary because he was not allowing Cawich to execute her obligations. “Cawich spoke to Brian Halliday for about an hour asking for permission to enter the yard to get to the birds. She clearly told him why they are confiscating the birds and what they need to do to get them back. Instead of assisting, Brian locked the gate and denied Cawich entrance, at that point, the police were forced to detain him. Brian resisted the arrest and was behaving disorderly, so the police officers had to use force to get him to the station,” said Castellanos.
Later in the night, Brian Halliday was released from custody and informed that he would not bechargedfor “Obstructing a Police Officer” and “Resisting Lawful Arrest”, but if the Forest Department finds out that the family had smuggled the two birds into the country they will be pressing charges. “I personally informed Brian about the terms of his release. I told him that he should be charged but won’t be unless Cawich’s investigation leads to the conclusion that the birds were brought into the country illegally,” said Castellanos.
According to Melanie Halliday, Mr. Halliday’s daughter, the family has gotten an attorney to assist them in getting back their two birds. “Keppi and Gabby are family to us. My dad loves those birds and would do anything for them. The way that the San Pedro Police and forestry officer behaved was unprofessional and rude. My brother was forcefully handled by four police officers. We don’t want the birds to be far away from my dad for too long because they can get depressed. We will work along with an attorney to get back the birds,” said Melanie.

In a release sent out by officials and posted online, BBR gave an update on the birds. “Both birds have been treated at the Animal Medical Center (AMC) under the care of the BBR. The macaw had suffered injuries, including severe swelling, to his leg due to the home made band that was placed on the bird. The band has been removed and the swelling is expected to subside. The cockatoo has been treated for the heavily plucked chest, legs and wing. In addition, the cockatoo demonstrated symptoms of severe mental problems and stress; BBR hopes that these problems will be relieved with better living conditions and increased socialization with other birds. Both birds were kept in extremely substandard conditions in cages that had not been cleaned for a long while and were heavily encrusted with feces. However the real reason for the seizure is that both of these birds do not have any paperwork whatsoever to allow them to be in Belize. Moluccan Cockatoos are critically endangered and cannot be imported to Belize without Convention on International Trade in Endangered Species of Wild Fauna and Flora (CITES) paperwork.The Macaw is a crossbreed of a Miligold Macaw. If this bird flew and encountered some of the last remaining Scarlet Macaws in Belize and bred, it could be disastrous for the survival of the pure bred Scarlet Macaw species. This bird would never be allowed into Belize because of this, so had to have been smuggled in from somewhere like Mexico.”
Cawich would like to inform the San Pedro community that this confiscation does not relate to native parrots. Any one that has a pet parrot that is native to the country should proceed with the registration process. Registration forms are available at the San Pedro Public Library. The Forestry officers will return to the island on Thursday, August 14th and Friday, August 15th to host the presentation that was interrupted.
To learn more on the laws, regulation and proper care methods of captive parrots visit www.belizebirdrescue.com.