On Friday, November 28th the Belize National Coast Guard held commencement ceremonies for intake number five. Held at the Williamson Complex in Ladyville Village, Belize, the ceremony saw 44 recruits officially joining the Coast Guard. Among the recruits was 21-year-old island resident Daniel Gregorio who not only completed the course but received the Champion Physical Training Award.
Family, friends and members of the diplomatic corps gathered at the complex to honor the young recruits. Operations Officer, Lieutenant Greg Soberanis welcomed those in attendance and congratulated new members of the Coast Guard. “Today, I am standing in front of these thirty-nine males and five females who, through intestinal fortitude, blood, sweat and tears decided to endure hardship through mental toughness,” said Soberanis. The recruits had to endure a 13 week course of both high level physical training and theory lessons.

Giving the keynote speech at the ceremony was Chief Executive Officer of the Ministry of National Security, George Lovell, who acknowledged the importance of the growth of the Coast Guard. “They continue to demonstrate that the Coast Guard service is an essential element of our national security. The protection of Belize’s maritime spaces and commerce from threats, both foreign and domestic, through the provision of maritime security, safety and protection of our people, industries and natural resources have been and continue to be the Belize Coast Guard’s claim to glory,” said Lovell. He also took the opportunity to announce the development that will be taking place within the Coast Guard. “The Belize Coast Guard will continue to develop based on the Coast Guard strategy, which is at its midpoint of its medium term. By the end of 2015, the strategy calls for an increase in strength of three hundred and twenty-five persons. Plans are already in effect for the acquisition of two eighty-foot coastal patrol boats. Some of the things we have in store include the construction of a new multi-complex building for maintenance workshops, housing personnel and providing space for a medical center, classroom and stores. We are also planning a marina at the Coast Guard headquarters facility for the berthing, launching and recovery of sea vessels.” 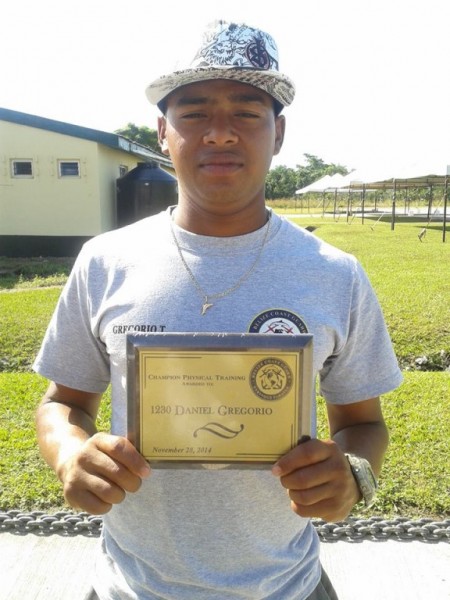 Gregorio is a graduate from both the San Pedro High School and San Pedro Junior College, and aspired to serve his country by protecting its waters. “The training was difficult. There were times that I wanted to quit, but at the same time I knew I had to do this to become part of something in life. I believe that the Coast Guard has much to offer me. This is an opportunity for me to grow and learn,” he told The San Pedro Sun. “The thing that I like the most about being in the Coast Guard is that we work as a team. Teamwork is very important to complete a mission; this is something everyone should practice in their daily lives,” Gregorio said. He was one of five recruits that received individual awards for excelling in their training regimen. “I am honored to have received the award. I just try my best at everything I do and the Coast Guard is no exception.”
The new recruits will officially report to work on Monday, December 8th. Congratulations to Gregorio and all the recruits of intake number five!