The San Pedro Police Department was the recipient of a brand new motorcycle, a pick-up truck and heavy-duty body bags to add to their vehicular fleet. The donation was made by the San Pedro Town Council in an effort to alleviate the police department’s lack of resources. The vehicles were handed over during a short ceremony held on Thursday, February 26th. The ceremony started shortly after 10AM and saw the presence of Mayor Daniel Guerrero, Area Representative Honorable Manuel Heredia Jr., Office in Charge of the Coastal Executive Unit Superintendent Luis Castellanos, Deputy Mayor Gabriel Nuñez, Neighborhood Watch President Steve Spiro, Acting Deputy Commissioner of Police Ruselle Blacketh, Officer in Charge of the Eastern Division Desiree Phillips, among other invited guests. 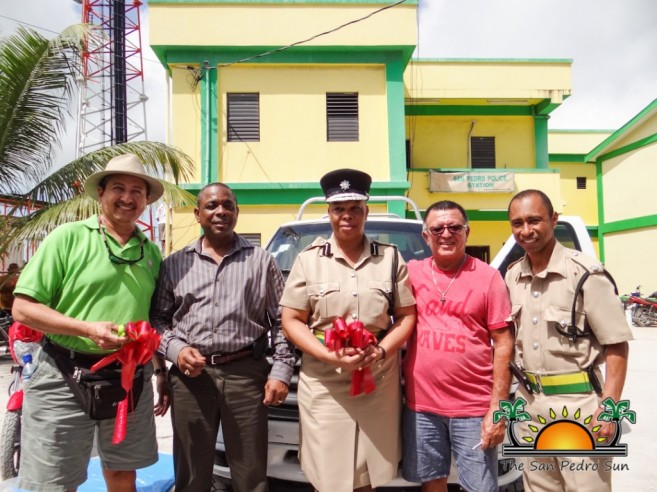 After protocol was established, Castellanos gave the official welcome address. “A couple months ago Mayor Guerrero promised to donate a white Ford Ranger pick-up and a brand new motorcycle to the San Pedro Police Department, well today he fulfilled that promise. As it relates to our vehicular resources, it is one of biggest setbacks as they are in a very deteriorated stated and it has become a costly financial setback to have these vehicles constantly repaired and keep them functional. Many may argue that the police are reckless at times, I agree with this to certain extent. But to put into perspective the pressure police vehicle undergo, the equation would be as follows: one vehicle*six divers*24 hours*365 days a year. That is equal to heavy wear and tear to all our vehicles, not to mention the atmosphere in the island and the bad road conditions in some area. This is a much needed donation and we assure you that we will take much care of this donation graciously given to us,” said Castellanos. 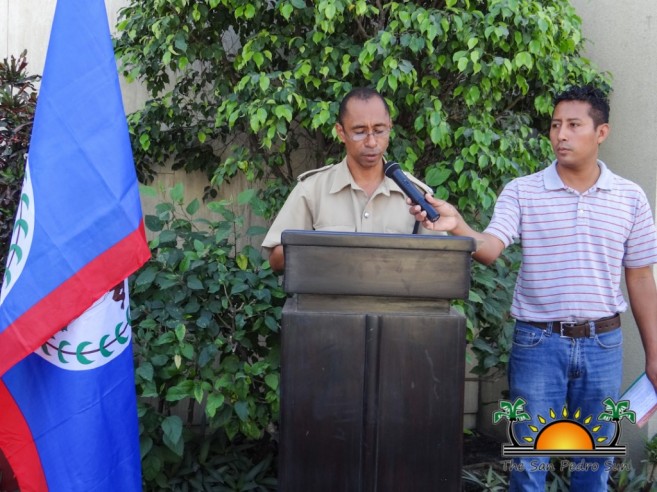 Next to speak was Blacketh, he reiterated the police’s mission to work with the community in keeping the country safe and that these donations are always necessary to continue the work. “We need to step up our policing in all levels. We have to turn up the heat because criminals have no boarder and they do not judge when committing offenses. We need to keep peace on our streets. We do not back down or negotiate with criminals. These donations only help to improve our job. We need the assistance of the community to continue ensuring that the people are safe. With our [limited] resources we cannot get the job done. Every little help is greatly appreciated,” said Blacketh. 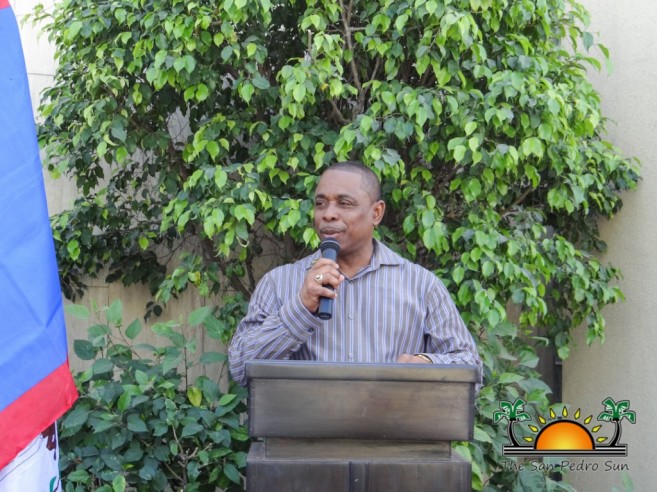 Phillips continued the momentum, stating that measure are being put into place to fight crime in the island and this donation only helps this initiative. “This community is yours, the criminal elements are just a few. The number of law abiding citizens is overwhelming. So we have to work hand in hand with the police to stop this nonsense. Community policing is the way the department is going and will be pushing it here in San Pedro. Thank you once again for this kind donation,” said Phillips. 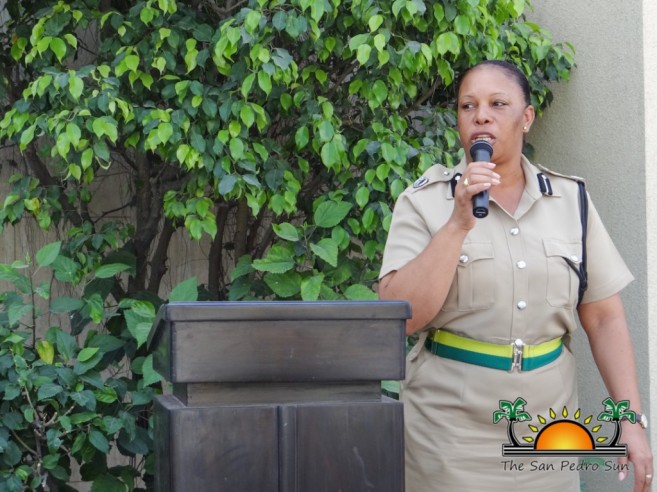 After some words from Spiro on the work that the People’s Coalition of San Pedro is doing to solve issues in the island, Heredia took to the mic. “I definitely believe that the San Pedro Town Council has done a fantastic job, maybe better than me, in assisting the police. San Pedro is the number one tourist destination and we have grown significantly. I have to agree with the police that they lack resources and I’m working on getting more assistance to them. I am concerned that San Pedro is practically taking the lead in murder, this does not speak well of the number one tourism destination in Belize. We have to send a message to the criminals that we no longer tolerate this and we will be fighting to take control of our island once again. We will make sure that La Isla Bonita is one again a peaceful place for all of us to live,” said Heredia. He also stated that he will be lobbying to the Government of Belize to give more vehicles to the San Pedro Police. 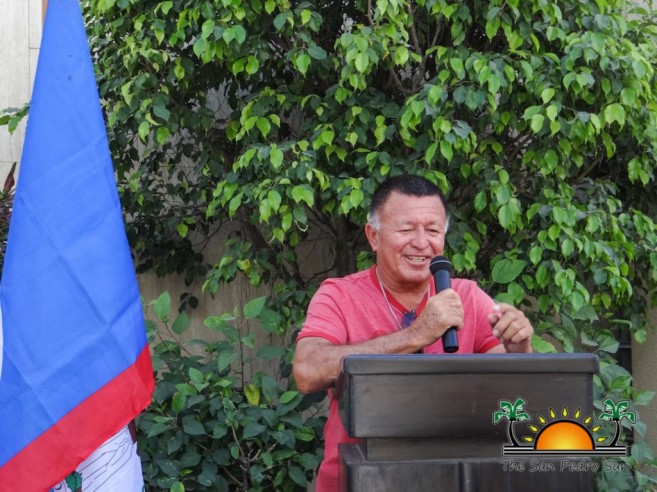 Before the vehicles were handed over, Guerrero delivered a few words. “People need to realize that the crime we are getting today is organized crime, which is tough for the police to solve. We are very concerned when it comes to crime. With these donations we hope that the police can continue improving. We have more donations for the police. After elections we will be giving one more motorcycle and a golf cart to increase the vehicular fleet. Most of the time people ask what the government is doing for them when they need to ask what they can do for the community. The council is not worrying what the government is doing for us, we know that they are always helping us, but we do what we can to do. We need to get organized. We need to send a message of zero tolerance to criminals. We are always here to help the police,” said Guerrero. 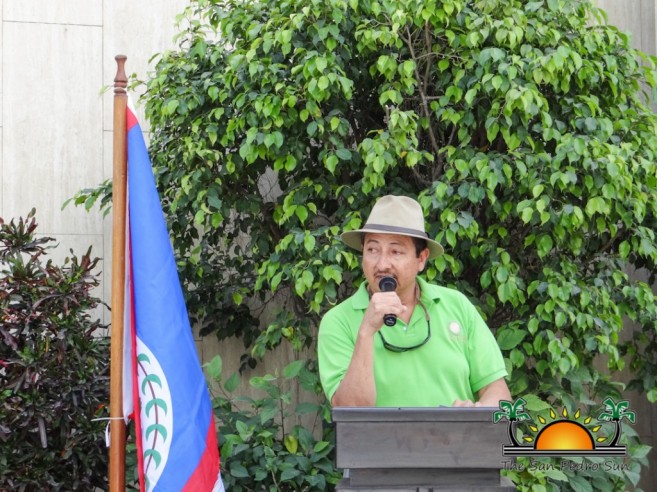