30 years, 22,000 hours of flight…a lifetime of memories. Captain Mike Estell has been flying for Tropic Air since June 2, 1986, a feat worthy of acknowledging! President of Tropic, John Greif III presented Estell with a fabulous Bulova watch, engraved with the Tropic Air logo during an intimate meeting on Wednesday June 22nd. 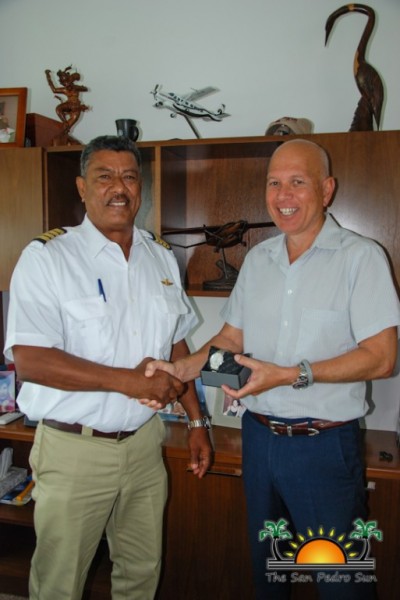 “Captain Estell’s 30 years of dedication and contributions to Tropic Air and Belize commercial aviation and the safety of the flying public are unparalleled,” said Greif. Both men reminisced over their time together at Tropic, sharing stories and anecdotes of three decades of work and friendship.
On June 2, 1986 Mike had been working three jobs with his family while living in Ladyville, Belize District. Living close to the Philip S.W. Goldson International Airport, planes had been a large part of his life. Eventually, he opted to go into aviation. “I flew the Delta November first, which everyone starts with,” said Estell.
He’s flown every plane that Tropic Air has ever had, qualified as Pilot in Command in the following Tropic aircraft: Cessna 172, Cessna 207, Cessna Caravan, Beechcraft King Air and DeHavilland Twin Otter. “My favorite flights are the overnight ones, especially Flores,” says Estell. He recalled how Greif did the official check-out for him as he graduated from plane to plane. “I admire his hands-on approach. I don’t know where aviation would be without Johnny.” 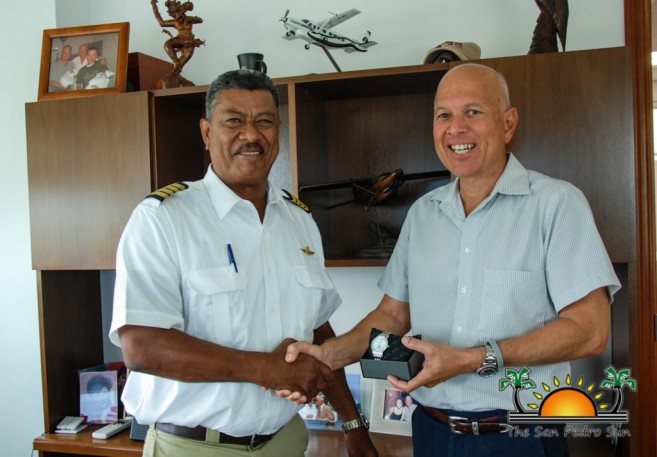 Greif shares the admiration as well. “Mike is deliberate…he takes his time. Flying and aviation are an avocation, it is not a job. We love it; it is part of our lives.”
Captain Estell’s total 22,000 accumulated flight time is especially remarkable, as most flights are anywhere between 15-20 minutes long. A true professional in aviation, he has shown loyalty, dedication and passion, and we join Tropic Air in saluting Captain Mike Estell! Congratulations, and fly high!