In an attempt to revive the Northern Ambergris Caye Neighbourhood Watch (NACNW), a meeting was held to discuss matters affecting the area. The March meeting was attended by concerned residents as well as local authorities, including the Officer in Charge of the San Pedro Police Department (SPPD) Assistant Superintendent Henry Jemmott and Mayor Daniel Guerrero. The top items on the agenda included safety, crime reduction, knowing neighbours, working with the police, and using security guard training in order to maintain the tranquility on that side of the island. 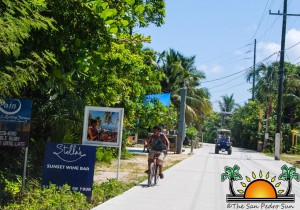 Businessman and resident of Northern Ambergris Caye, Rob Eykelbeysh, started the meeting by welcoming everyone who made the effort to attend. He shared that the NACNW is a cooperative effort between residents of Northern Ambergris Caye and the police, adding that any suggestions to better the mission of the group are welcome.
Speaking on the issue of hiring security personnel, Jemmott advised to always consult with the police first in order to obtain police records. “Since 2014, San Pedro has seen a steady decline in crime,” he said. “Success is due to the people.”
A plan to provide a boat and an officer to the north part of the island from 6AM to 6PM, seven days per week was then discussed. A few residents asked Jemmott for his opinion in the option for businesses to hire night shift security personnel. “These people must be properly trained in police procedures, and we don’t have officers to do that,” Jemmott responded.
Jemmott added that eventually the police department hopes to decentralize and have a station in Northern Ambergris Caye to provide service to difficult-to-reach areas. This included Secret Beach, which those gathered declared as dangerous after dark due to its remoteness and development boom. Due to the recent shuffle in the Government Ministries, a timeline for the new station could not be specified. However, the SPPD committed to the idea. It was suggested that constables may be used to man the north security booths, until the police have the funds needed to open a station.
Mayor Guerrero delivered a few remarks. He swiftly addressed the issue of the late-night bars by Secret Beach, stating that their liquor licenses were issued with the condition that they only open until 5PM. He pledged the full support of the Town Council to the NACNW, announcing that the Town Council is offering new police booths for the north side of the island. The booths will be located at strategic points in order to relay emergency information to the police, and are expected to be powered by solar energy. Each booth will have its own phone number for easy contact.
Guerrero also touched on the rapid growth and development of the island, saying that “it must be sustainable for the future.” Guerrero even announced that the collection booth at the Sir Barry Bowen Bridge will be removed, and that a second bridge is going to be built. There were no more details available on that matter.
Those present all agreed that there is much work to be done on that side of the island. More ideas and discussions will be put forth in future meetings to be held on the last Saturday, of every month, 10AM at Grand Caribe, unless otherwise posted.