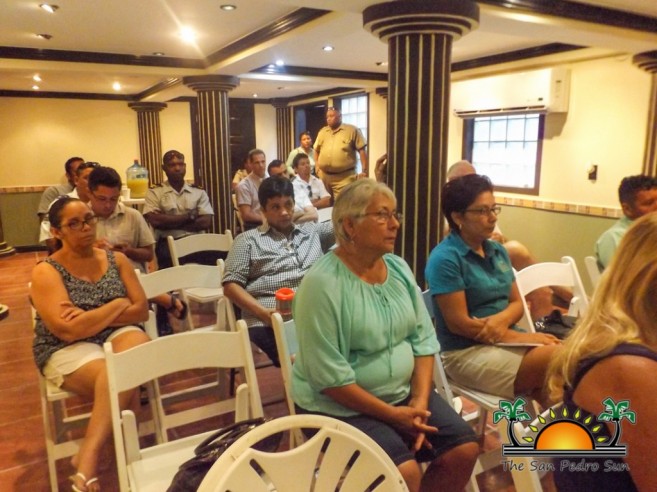 On Tuesday, May 24th, San Pedro Town joined the other communities around the country as they formed respective People’s Coalition Committee (PCC) for their areas. The committee is made up of police, citizens, and members of the different business sector who are committed to come together regularly in order to discuss and solve local issues affecting their area. The PCC also takes on the responsibility to develop better police and community relations, and find ways to work in partnership.
The committee comprises of six key members and six additional members who will render support to the organization and its main members. The members of the organization which are to serve for the following two years here in San Pedro are: Chairman- Carol McCann from Sotheby’s International Realty, Vice Chairman- Yolanda Parham from The San Pedro Town Council (SPTC), Public Relations- Jorge Aldana SPTCl, Treasurer- Ana Ico from The Palms, Secretary- Dion Vansen from The San Pedro Sun, and Vice Secretary -Sandy Betz-Einsberg from The Belize Red Cross, San Pedro Branch. Also present at the meeting were Mayor Daniel Guerrero and Minister of Tourism and Civil Aviation Honourable Manuel Heredia Jr, Officer in Charge of the San Pedro Police Sub-formation Superintendent Sandra Bowden, and Deputy of the Coastal Executive Unit Henry Jemmott, who all form part of the committee as ex-officio members. 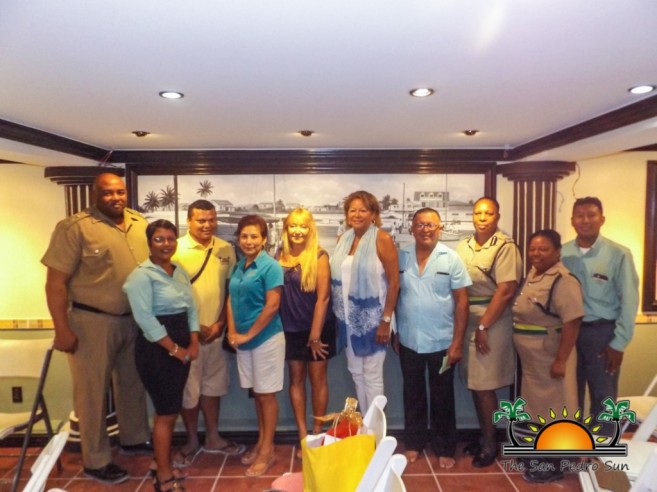 Hosting the gathering was Assistant Commissioner of Police Officer Commanding Eastern Division North Dezerie Phillips, and she gave a presentation on how the coalition operates. “This is not a forum for complaints against police,” she said. “The purpose of the forum is to take back our communities from law breakers and from public and private criminals.” She stated that such actions would restore public relations and public confidence in the police.
Phillips explained that reason for the committee is to remind Belizeans that everyone has a role to play in safeguarding the country’s national security. Individual citizens and private sector members of civil society groups are thus invited in this process of transformation. She emphasized the need to take necessary steps to reduce crime and fear of crime for safer communities.
She also mentioned that such groups are made up of reputable people of various social and professional organizations who are willing to work with the police to help build good relationship with them. “As part of this committee you will be able to find and suggest local solutions through social intervention to the problem of crime in your community,” said Phillips.
The PCC commitment
Members of the PCC will not be doing actual police work. The duties of a member of the committee are to primarily identify, prevent and respond to crime issues. They are to advise the police through recommendations. Members can be helpful through designing and implementing strategies for safer streets, neighborhoods, and communities when dealing with acts of violence. “We recognize that the police cannot do it alone. Arresting people, with nothing more, will not solve these issues; thus we need groups like this in order to work together,” said Phillips.
Other activities in which members can take part will be in fundraising events to assist the police in acquiring equipment or awarding members of the community for their outstanding participation. From time to time, assistance will be required in helping the community understand the functions of the police, while at the same time, educate the public on what is admissible for evidence in a court of law. The education campaigns will also aim to teach citizens how to take a stance against crime and how to apply the power of the law in the face of criminal conduct.
During her presentation, Phillips gave example of other existing coalition committees around the country who are successfully working with the law enforcement. She further mentioned that a successful committee will ensure that police officers get to know the people of the area they are policing. Furthermore Phillips believes that by involving members of the PCC to advance the concept of Neighborhood Watches is another step for this achievement. The neighborhood watch groups on Ambergris Caye were commended for having the highest marks in the Belize District. “We need these types of groups in our communities and we also need to encourage more people to be part of them. Members of the PCC need to know that they can also be part of the voluntary special constable or the citizens on patrol program,” said Phillips. She also indicated that police should utilize all media, to highlight the work of the police.
The People’s Coalition Committee in Ambergris Caye will be meeting once a month to discuss matters affecting the island. The first meeting is expected to happen before the month ends.

Look ahead to when COVID-free tourists ARE allowed back to our island.