For the second time this year, the Government of Guatemala has changed the date of their referendum to settle the Belize-Guatemala territorial dispute at the International Court of Justice (ICJ). The new date for the referendum is now set for April 15, 2018. The change was announced on Tuesday, November 14th by the Guatemalan Supreme Electoral Tribunal, explaining that the change is due to religious celebrations held in March. 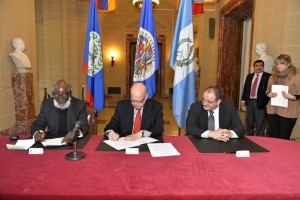 In Belize, the Leader of the Opposition, Honourable John Briceño of the People’s United Party, believes that there is more to it than that. “I think Guatemala has massive problems that they have to deal with,” said Briceño. “This includes corruption, bad governance… so I would not be surprised if a month from now or later they are going to change the date again.” Briceño also called on Prime Minister Dean Barrow to ensure that a re-registration for voters takes place in Belize prior to the referendum. “He has promised to do it and we need to hold him to that,” Briceño ended.
In October of this year, the electorate authorities of Guatemala had set March 18, 2018, as the date for the referendum, but a few days later it was changed to March 11th to avoid conflicting with a massive Catholic procession that is taking place from Guatemala City to Antigua. After going over the dates for the second time, April 15, 2018, was finally chosen, assuring that no conflicts with the Easter holidays would occur.
It is expected that up to seven million Guatemalans will come out to vote on the day of the referendum. Guatemalans will be asked to answer either yes or no to the question: ‘Do you agree that any legal claim of Guatemala against Belize on continental and island territories and any maritime areas corresponding to such territories shall be submitted to the International Court of Justice for final determination and that the court shall determine the boundaries of the respective territories and areas of the parties?” The same question will be asked to Belizeans when the referendum takes place sometime in late 2018 or early 2019.
The referendum was agreed by Belize and Guatemala in 2008 under the auspices of the Organizations of American States (OAS). Both countries agreed that their borders were not defined and the only solution was to take the matter to the ICJ for a final solution. It has been agreed, that if the referendum fails to yield the definitive answer in either of the countries, it must be repeated until they can get a positive result.
The issue of the Guatemalan claim to Belize has been the cause of tension between both countries for decades. The latest incident at the border, involving Guatemalan soldiers and a media crew strolling into Belizean territory has prompted a protest note by the Belizean Ministry of Foreign Affairs. The incident took place on Friday, November 17th, as members of the Benque Viejo del Carmen reported that at 10:45AM four Guatemalan Kaibil soldiers crossed into Belize along with three journalists. They were approached by Belizean Police Officers, who asked them to immediately leave. The Guatemalan soldiers and the media group returned to their side of the border without incident. The Government of Belize has since contacted their Guatemalan counterparts in an attempt to prevent a re-occurrence.
Guatemala recognized Belize’s independence in 1991, but it continues to claim more than half of the Belizean territory, including various cayes on the Caribbean Sea. The territorial issue has seen hostile situations at the border between Belize and Guatemala, causing the death of Belizean and Guatemalan nationals.
In 2014, Police Constable, Daniel Conorquie, was gunned down by a Guatemalan border bandit, while he was on duty at the Caracol Archaeological Site, in the Cayo District, just about a mile away from the Guatemalan border.
In recent years, more deaths have occurred, mostly involving Guatemalans who according to Belizean military officials have attacked Belizean soldiers. Despite such allegations by the Belizean authorities, Guatemala continues to accuse Belize of the unfounded death of about 10 Guatemalan nationals along the border.
The Belizean Armed Forces continue to report various incidents at the border with Guatemalan peasants who encroach into Belizean territory. It is suspected that their aggression towards members of the Belizean security forces may result in fatalities.