Invasion Latina Concert to benefit a worthy cause


LRS Promotions alongside the San Pedro Lions Club will be hosting a benefit concert entitled “Invasion Latina” part 2 at the Lions Den in San Pedro Town on Saturday, March 24th. The concert will feature music by DJ Super Mario, DJ Flex, Rompe Raja, and Versatile Premiere Sounds. Everyone is invited to attend the show as 10% of the funds raised will go towards helping disabled island resident Miguel Ayala and his son. 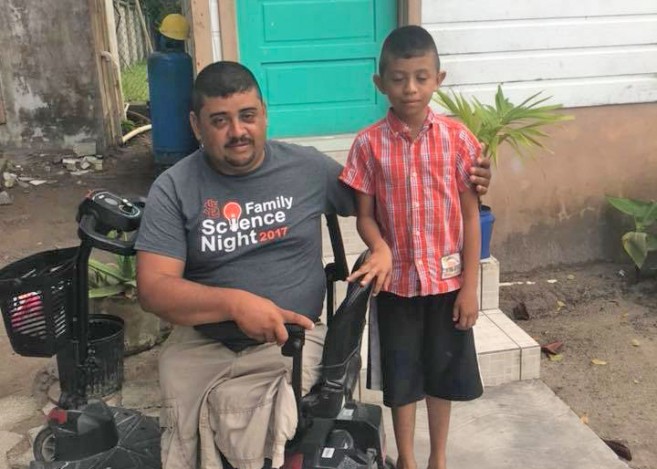 Ayala, who cares for his son, decided to travel to the USA looking for a better life for his family. He made it all the way to the Mexican/American border, with the only thing left was for him to do was hop on a train. However, Ayala didn’t know that it was an electrified train, and when he grabbed on the electric current jolted him off the train and his legs went under. Both of his legs were cut off. He was then hospitalized for 64 days. “I see him all the time when I’m going home and after I read his story on social media I decided that I wanted to help him out. That’s why we decided to do Invasion Latina as to raise funds to help him and his son. I want to invite everyone to come out and be a part of this great cause,” said organizer of the Invasion Latina Concert, Luis Romero. Since the incident, Ayala has been unable to work and providing for his son has become difficult. Due to the financial instability, his son was unable to attend school until recently when assistance was provided to him. It is the hope of the event organizer that funds collected through Invasion Latina will provide further assistance.
The sponsors of the Invasion Latina include Cayo Espanto, Tropic Air, The San Pedro Sun, Reef Radio, Reef TV, Mayor Daniel Guerrero, Hon. Manuel Heredia, Spindrift Hotel, My Secret Deli and Brianna’s Food Place. Tickets are available for $15 and can be purchased at Reef Radio or you can call Romero at 629-0454.