Another proud San Pedrano called to the Bar of Belize


San Pedro Town is known for being the prime tourism destination in the country and one of the most beautiful places on the planet. The island is also the base for many talented Belizeans in different fields. One of these areas is law, from which skillful attorneys have emerged to represent the island and country. The recent addition to such an important profession saw proud San Pedrano Javier Williams officially called to the Bar of Belize. This has been Williams’ life goal, and now he is licensed to practice in the country. 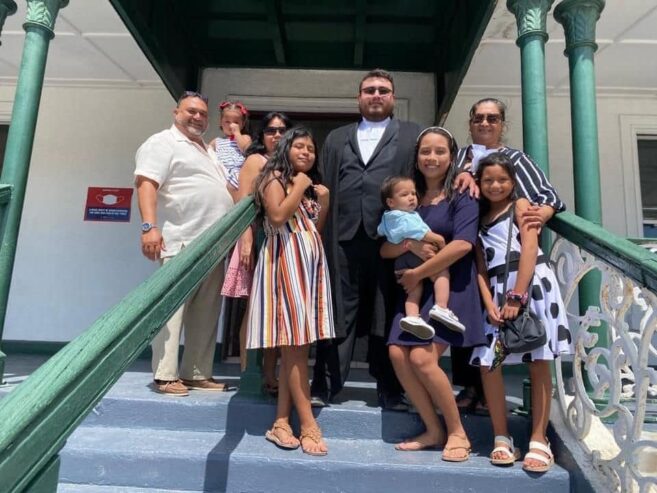 The official ceremony took place in Belize City on April 26th at the Supreme Court, where Williams shared his accomplishment with members of his immediate family. Williams communicated that he had been curious about the law profession and decided to make it his career after discovering that it is a venue to help others. “I am happy to venture into a profession where you can make a difference and be the voice of those vulnerable to any injustice,” he said. The now licensed attorney added that he is here to offer his assistance to his fellow islanders.

The journey to achieve this goal started after Williams finished primary school in San Pedro at New Horizon Seventh Day Adventist School. He attended Saint John’s College for his secondary education and pursued his tertiary studies at Saint John’s College Junior College. Williams was also enrolled in an Advance Level Law course at the University of the West Indies (UWI) Open Campus in Belize City. In 2016 he traveled to Barbados, where for the next three years, he was accepted to do a Bachelor of Law at the UWI Cave Hill Campus. In 2019, he attended the Norman Manley Law School in Jamaica, where after two years of studies, he obtained a Certificate of Legal Education. The final requirement is to practice law in Belize.

Williams is currently working at the Legal Advice and Services Centre, a branch of the Attorney General. Opening his law firm is another goal for the future, but for now, Williams looks forward to getting the experience he needs.

He thanks everyone who helped him, particularly his immediate family, wife and kids, and friends. Williams shared that finishing law school was a promise he made to one of his close family members, the late Jose Aljemiro “Milo” Paz Sr. Now that he has accomplished his dream, he encourages everyone to work hard for whatever they want.

The San Pedro Sun congratulates Javier Williams for his determination and success in achieving his dream.

Letter to the Editor: Julian Smith