« Older: Ghost net removed from off the reef at Hol Chan Marine Reserve
Newer: » Sale/Export of Harvested Rosewood to be allowed by GOB

Marine Reserves (MPAs) in Belize are used as a fishery management tool. All MPAs in Belize are zoned to include areas of no-take as well as areas of general use that are open to commercial activity. The Hol Chan Marine Reserve is no exception to this. Since the reserve designation in 1987, commercial fishers were recognized as important stakeholders, and their traditional fishing rights were recognized. The regulations governing the reserve makes provisions for these traditional rights to be exercised and as such Hol Chan has always limited the commercial fishing activity to only those few traditional users.

Last Thursday, March 21st marked the start of a new endeavor by Hol Chan to improve the relationship between the marine reserve and those fishermen that use the area. A workshop was held with fishermen at the Fido’s Court Yard to present fishers with a new project idea. The goal of the workshop was to hear from fishermen if they were interested in being organized as a group and working with Hol Chan and the Belize Fisheries Department to develop a sustainable management approach for the commercial fishing taking place inside the reserve, by adopting responsible fishing practices and implementing adequate fishery data collection in a participatory process that involves both stakeholders and marine reserve managers.

The Belize Fisheries Department has been promoting a managed access approach to fishing in Southern Belize. Managed Access is where the fishery is controlled and each fisher has their designated areas to fish. The Department plans, in time to introduce this throughout the entire country. Hol Chan is unique in that the fishers in this area have been operating under this system since the establishment of the reserve; the process only needs to be formalized.

The fishers that attended the workshop were very enthusiastic about this initiative. They expressed their desire to be organized as a group, and recognized that this will give them more strength in setting a standard price for their products.
A guess presenter from Mexico, Kim Ley-Cooper was invited to present to the fishers the idea of sustainable branding of their product and gave examples of how this approach has been used by fishers in Mexico. The fishermen were also very open to this idea; however it came back to the need for them to be organized. All the fishermen that were present had an interest in forming a commercial fishing association. Also present were persons from the Environmental Defense Fund who expressed their desire to work along with Hol Chan and the fishermen in supporting their efforts. 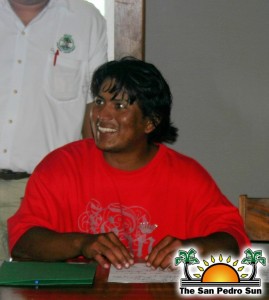 The day concluded with the fishers being asked to select someone from amongst themselves to represent them on the Board of Directors for Hol Chan. It is important that they are represented on the board so that issues involving the fishers can be addressed by the board. Mr. Lorenzo Lopez was selected as their representative. Lopez will be responsible to attend the meetings of the Hol Chan Board and take any concerns of the fishers to that meeting and report back to them all decisions that were made during that meeting.

The management of Hol Chan and the Belize Fisheries Department is very excited to be working with this very dynamic group of fishermen.