Home » Crime & Violence » Wanted teenager turns himself in to Police

Wanted teenager turns himself in to Police 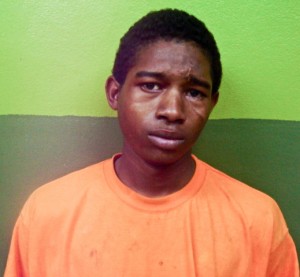 A country wide manhunt for a wanted teenager is finally over after he decided to turn himself into police custody. After two weeks on the run 17 year old Ernesto Bernardez, who was wanted for shooting a police officer and for stealing two guns from two separate policemen in Caye Caulker Village, walked into the Eastern Division Police Station in Belize City on Sunday April 15th and turned himself in while accompanied by his mother. A countrywide bulletin for his arrest was circulated, calling the minor “armed and dangerous.”

On Tuesday April 18th, the minor was taken to, and arraigned, in the Belize City Family Court where he faced a number of charges. Those charges includes two counts of attempted murder upon police constables John Valerio and Ian Wagner, two counts of use of deadly means of harm upon both officers, as well as a single count of wounding upon Wagner, and two counts of theft of the firearms.

The charges arose from two separate incidents that ended up in PC Valerio being grazed by a bullet on April 2nd shortly after 5PM near the Caye Caulker Airstrip. PC Valerio responded to a report that a wanted Bernardez was about to take a plane off the island. Bernardez was wanted for hitting and disarming PC Wagner of his police issued firearm on April 1st. It is alleged that Wagner had attempted to arrest Bernardez, who was wanted for other previous crimes while socializing. During the arrest a struggle issued where the teenager managed to relieve Wagner of his service revolver and attempted to shoot him but the firearm failed. After failing to fire off, Bernardez allegedly hit the officer in his forehead with the firearm and made good his escape. A police search for him the following day resulted in PC Valerio being shot to left part of his head and was also disarmed of his firearm. PC Valerio was only grazed, and he was treated and released the same day.

Police did not indicate if Bernardez handed over the two firearms that is the property of the Police Department.  Because the offences are indictable, no plea was taken and charges was read to the minor in the presence of his mother before being remanded to the Wagner’s Facility located at the Hattieville Prison.  Bernardez is due back in court on June 6th.