Shortly after publishing this article, around 12:50PM, The San Pedro Sun learned that Karol Mello has been re-arrested pending charges from the Belize Immigration Department. Details of that arrest will be reported as they become available.

The Supreme Court in Belize set Karol Mello free after handing down a decision shortly after 9AM on Friday, August 10th. Mello was detained on July 11th as a result of accusations that he may have been involved in the death of a woman and a child in Slovakia and two gang leaders in 2003 and 2004 respectively. As previously reported in The San Pedro Sun, Mello was detained with the intention to extradite him to Slovakia based on an Interpol request.

Mello’s attorney in Belize, Senior Counsel Godfrey Smith, first went to court and filed an injunction order against an extradition order by the Government of Belize until he had been given a trial in Belize. After the Belizean courts granted Mello’s attorney the injunction, a Habeas Corpus case was filed to have Mello’s case dealt with immediately.

At the start of the Habeas Corpus on July 31st the Crown’s Council Magali Perdomo asked the court for more time to prepare a case against Mello. Justice Legall granted Perdomo until August 2nd when the hearing was held.
After hearing arguments from Mello’s attorney Godfrey Smith and the Crown’s Council Magali Perdomo, the Supreme Court Judge Justice Oswal Legall ruled that Mello’s extradition order was “procedurally flawed.” The statement that proved pivotal was based on the Minister of Immigration Hon. Godwin Hulse’s interview given to 7News in which he indicated that even though the Slovak Republic has no Extradition Treaty with Belize, Mello should, “Face the music”.

Mello was represented in court today by Senior Counsel Andre Marshalleck. According to a report from The Independent Newspaper, “Justice Legall said that while it was clear to him that Mello was evading murder charges in Slovakia, what needed to be done to effect his deportation had to be done in a lawful manner. The Government of Belize, he said, must follow its statutory laws.” Justice Legall went on to say that Mello was illegally detained and ordered that he be released forthwith from prison. The Independent also report Legall awarded costs of US$1,500 to the applicants.

Marshalleck told the court that they were withdrawing an application for an extension of an injunction prohibiting the Government of Belize from deportation or otherwise expelling Mello which was due to expire today.
Perdomo was unable to satisfy the court why Mello was detained and should be extradited. Smith had maintained that the government had no reason to detain Mello and that he had broken no law in Belize. Smith had also indicated to the court that Mello’s detention, based on an interview given by the Minister of Immigration of Belize, Hulse stated that Mello was a “threat to the public” but also indicated in the same interview that Mello could return to Belize once he “faced the music” in his country and was cleared of charges. The court ruled that it cannot allow Mello’s expulsion without the proper procedures. 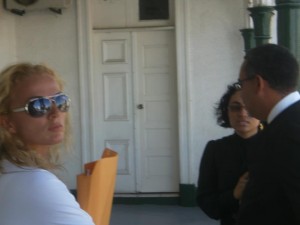 Marshalleck told the court media outside of court that the judge’s decision was a “strong decision ” Marshalleck also told reporters that that while there is a risk that his client Mello could be re-arrested, he very much doubted that the Government could do so under the same grounds and that he doubted that they would immediately attempt to do so. The San Pedro Sun understands that shortly after the court ruling, Mello was freed from the Belize Central Prison into police custody. He was transported to the Belize City Queen Street Police Station where he is expected to be processed.

According to The Independent, Mello’s attorney will move ahead with the constitutional application filed on Monday. The application which was served yesterday on behalf of Mello’s infant son, Marco Rado Mello, argues that the attempt to deport the father is a violation of the son’s constitutional rights. Marco Rado is a Belizean citizen by virtue of having been born in Belize last month.

In a July 17th press release from the family of Mello it stated that Mr. Mello “…came to Belize to find a safe home for his family away from the corruption and malicious, false prosecutions of an unstable government. He came to Belize to raise his family, including his Belize born son. Once again, Mr. Mello is being dragged into yet another court to answer to these false charges and accusations.”

Mello was picked up by San Pedro Police on July 11th on Pescador Drive in San Pedro Town. Mello had been living on Ambergris Caye since 2010 with his actress wife Zuzana Marosova. There second son, Marco Rado was recently born in Belize. Mello holds Belizean residency. Even though Belize has a diplomatic relationship with Slovakia, there is no extradition agreement with the European country.