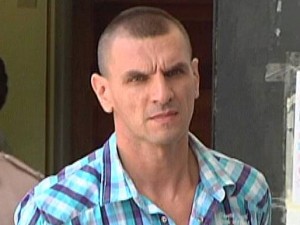 Wanted Slovakian Karol Mello is a free man in Belize. Immigration charges against the 42 year old Mello was struck out in the municipal court in Belmopan City shortly after 10AM on Monday August 20th. When Mello appeared before Magistrate Judge Hurl Hamilton of the Belmopan Magistrate Court, there was no prosecutor representing the Crown. Mello has been in and out of court in Belize following his arrest on July 11th where he successfully challenged an extradition order issued by the Government of Belize (GOB) and immigration charges brought forward by GOB’s Immigration Department.

Mello was in court in the company of his actress wife Zuzana Marosova and his attorney Senior Council Godfrey Smith. The Slovakian was accused by immigration authorities in Belize for the offences of perjury and uttering a passport which he was not entitled to utter. The allegation was in relation to Mello’s Slovak passport with serial number 3191427 which was reportedly withdrawn by the Slovak Government on or around July 2011. The Immigration alleged that on September 17th, 2011 Mello used the said passport to successfully obtain his Belizean permanent residence status.

Charges against Mello were brought forward on August 10th, the day Supreme Court Judge Oswal Legall had ordered his release following a Habeas Corpus hearing. The Habeas Corpus case was in regards to an extradition order that the GOB had issues based on the request of Interpol. But instead of being freed, Mello was released into the custody of the Police where he was process and charged on immigration offences, taken to court and remanded to the Belize Central Prison. Mello was successful in obtaining bail on Friday August 17th. His attorney Andrew Marshalleck was able to convince Justice Denis Stanley Hannomansingh that Mello should be granted bail since the charges were “really very frivolous.” Marshalleck told reporters on Friday that “one charge cannot succeed because its beyond limitation, period, and the other charge of perjury is highly suspect given that the documents which allegedly contains the false information weren’t signed under oath and can’t support perjury and given the fact that Mr. Mello has a constitution right to his liberty.” Mello received his permanent residence in September of 2011 making March 2012 the limited period to have such charges made against him. And as such the Judge herself agreed in that the six month limitation period for bringing such a charge was long since passed. Justice Hannomansingh then granted Mello bail in the sum of $10,000 Belize with the condition that he surrender all travel documents and report to the San Pedro Police Station.

So when Mello appeared before Magistrate Judge Hurl Hamilton in the Belmopan City Magistrate Court, Smith was able to successful argue that the two charges were “weak” and in fact one of the charges had a “six month limitation” which had “expired” in March 2012. With the absence of a representative of the Crown (complainant) Judge Hamilton struck out the two charges against the defendant. The unexpected decision to strike out the cases based on the lack of a representative from the crown puts a final exclamation mark to Mello’s legal debacle in Belize.

Mello’s legal battle in Belize started on July 11th when he was picked up by San Pedro Police on Pescador Drive in San Pedro Town. The decision to arrest Mello was on the strength of an Interpol request to have the Slovakian taken to his home country where is wanted for the investigation  of the death of a woman, her 10 year old son and a gang boss in which it is alleged to have occurred in 2003 and 2004 respectively. But Mello was able to successfully fight the extradition request based on a statement given by the Minister responsible for Immigration Hon. Senator Godwin Hulse and the fact that there is no extradition agreement between Belize and Slovakia.

Karol Mello has been living permanently in Belize since September 2011 along with his wife Zuzana. The couple has a Belizean son, Marco Rado, and having been living at the Cloisters in San Pedro Town. We have attempted multiple times to get an interview with Karol Mello but have since been unsuccessful.