One minor injured in shooting 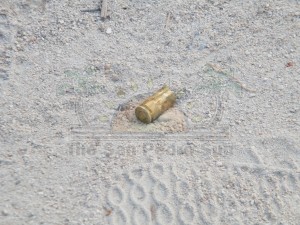 San Pedro Police are investigating a shooting incident that occurred around 4:30PM on June 10th. The incident took place on Sandpiper Street in the San Juan Area of San Pedro Town. The victim is a minor, thus his name cannot be released at this time.

According to multiple eyewitnesses, they saw a man dressed in green pants and shirt and wearing a camouflage cap chasing another male person. Suddenly they heard two gunshots and saw a man fall to the ground. According to several students who were coming out from school at the time of the shooting, the man ran onto Cormorant Street with a gun in his hand and made good his escape. “We saw two men running. We saw one of them with a gun and he fired two shots. We jumped over a fence on the side of the road because we were afraid to get shot,” said one of two students that saw the shooting as it unfolded.

While police are still investigating the shooting, two 9mm empty shells were found in the area. As a result of the shooting, a male minor received injuries to the right hand and was rushed to the Dr. Otto Rodriguez San Pedro PolyClinic II for treatment. San Pedro Town Police say that while the minor is known to them, their investigation continues.