Police on Ambergris Caye continue their investigation regarding the brutal attack of a San Pedro Town resident. The incident occurred sometime around 1AM on Saturday, December 7th, and the victim is 30-year-old Luis Alamilla, a Belizean boat captain of Escalante Sub Division.
Alamilla told police that some time around 10PM on Friday, December 6th he went to socialize with a few relatives and friends. While heading home shortly after midnight, Alamilla said that he was assaulted on his premises by three men. According to Alamilla, as he entered his yard, three men, two Hispanic and one dark skinned approached him and began attacking him. Alamilla told police that one of the men punched him on the right side of his face, causing him to fall to the ground where he began fighting back. Alamilla added that while on the ground, the two other men were kicking and punching him. 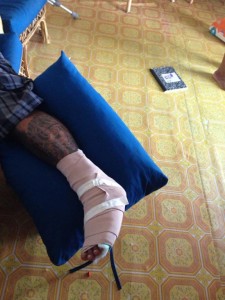 Alamilla finally managed to get up and began hitting one of the attackers in the face, fighting back. However he was overpowered when the other two advanced towards him and began beating him once again. According to Alamilla, one of the attackers shouted “stab him”, but fortunately, a passerby on a golf cart pulled up, causing the three men to flee after taking Alamilla’s back pack with his personal belongings with them.
In the back pack was Alamilla’s brown leather wallet containing his boat captain license, his tour guide license and his driver’s license. Also stolen was his black Apple iPhone, a blue and white case, and a black and silver Poulster watch, all to a total value of $2,400.
As a result of the attack, Alamilla sustained injuries on his left eye and left side of the face, along with a sprained left ankle and broken toes.
Alamilla has requested court action and based on the description given, police believe that they know who the three men are and they are looking for them. Anyone with information that can help police in their investigation are asked to contact the San Pedro Police Station at 206-2022.