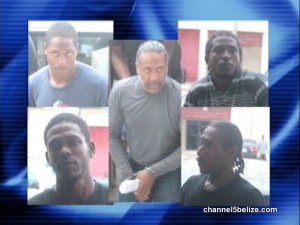 Mason (center) along with his accomplices

On Tuesday, December 3rd, William ‘Danny’ Mason, Ernest Castillo, Ashton Vanegas, Terrence Fernandez, and Keiron Fernandez were found guilty of the kidnapping and beheading of Pastor Llewellyn Lucas. The trial took place at the Supreme Court in the Capital City of Belmopan before Justice Antoinette Moore, who considered all evidence presented against the five men alleged to be involved in the heinous murder that occurred in July 2016.

The trial lasted over an hour and Justice Moore found that such evidence as DNA, surveillance footage, and the head of Lucas found in Mason’s vehicle among other

evidence beat any chance of acquitting them of the crime. While sentencing is reserved, for now, one of the attorneys representing Mason’s case indicated that his client is unhappy with the verdict. He added that the accused have up to 21 days to appeal the decision of the court and at this moment it is uncertain if they will seek this alternative to reverse the judgment.

Pastor Lucas’ murder shocked Belizeans across the country after it was learned that he had been beheaded. According to reports, Pastor Lucas met his death after visiting Mason’s residence in Belmopan. Investigations revealed that Lucas was kidnapped by Mason’s henchmen (Ashton Vanegas, Keron Fernandez, Terrence Fernandez, and Ernest Henry Castillo), and taken to Mason’s farm at Mile 31 of the George Price Highway, where he was beheaded. Evidence of the crime also suggests that his body was burned, while his severed head was found in a bucket in Mason’s pick-up truck.

Read full details of the trial in our print issue of Friday, December 6th.