Ambergris Caye was once again well represented at the annual Sagicor Visionaries Challenge where secondary students from across the country presented their scientific ideas for judging. San Pedro High School (SPHS) was one of the five schools participating, and they did an impressive job, claiming one of the top prizes in the educational event. 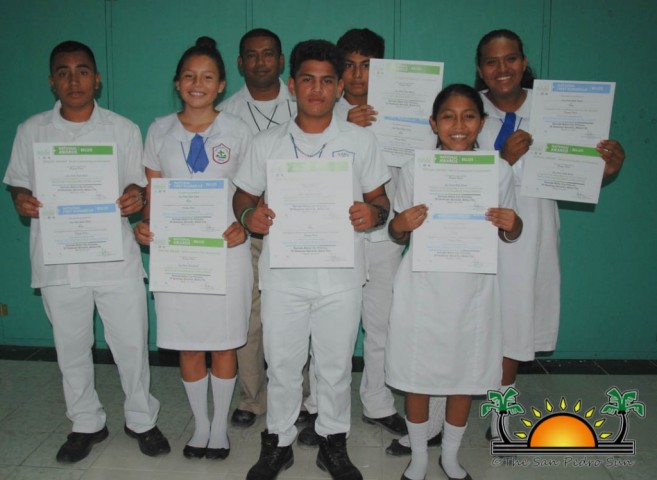 The biennial event focuses on innovative scientific and business ideas encompassing the fields of science, technology, engineering, and mathematics (STEM). The competition was held on Wednesday, March 16th at the Ramada Princess Hotel in Belize City. Two teams represented SPHS. Team Papaya Power comprised of Jenessa Sierra, Kleyni Ramirez, Kimberly Lima, Daniel Figueroa, and Johann Marin. The team produced a Papaya Leaf Tea, which according to the team could replace coffee, and has numerous health benefits. The Papaya Leaf is believed to boosts the immune system, containing enzymes that help with digestion. Furthermore, the team believes that the tea contains substances that aid in the prevention of cancer.

The second team was named Aloe Plant in Success, and was comprised of Bruce Garbutt, Jahson Wright, Juan Hernandez, Divya Wadhwa, Victor Juarez, Laila Gonzalez, and Job Mendizabal. They came up with a project that focused on creating beverages from the Aloe plant, as well as meal products made with the purpose to alleviate stomach diseases.
While personnel from the Ministry of Education and other guests toured the different projects that were on display, judges were having a hard time deciding which project would take the top prize. However, decisions were made, and at the end of the day, the top winners of the event were announced, and they received their certificates.
Taking the First Runner-Up spot, or second place, was SPHS’ Team Papaya Power! Additionally, team Papaya Power received a special award for “Most Community Involvement,” thanks to an article published in The San Pedro Sun prior to the competition. Even though SPHS Team Aloe Plan In Success did not grab any of the top prizes, their presentation did quite impress the judges and attendees.
Ricardo Sedacy, Physics teacher at SPHS, says he is greatly appreciative of the enormous support received from the school and the community. “I am very proud of the teams that represented us very well at the event,” he said.
Papaya Power team captain Jennessa Sierra says she feels thrilled with the outcome of the competition and would take the next challenge again. “We feel very proud of our work. Hard work pays off. However we do not want our project just to end here,” said Sierra. “We are planning to introduce the Papaya Leaf Tea to the community and have it on sale at the different business in town.”

Besides winning the second place at this year’s Challenge, the SPHS is getting some great prizes as well. As part of the award for being the second best team, the school will be getting a cash prize of $2,000, two Biology kits, one Physics kit, one Chemistry kit, and a Vernier Caliper Laboratory Software. This software puts easy to use data loggers, sensors, experiments and graphing/analysis software into the hand of students. It helps educators develop the next generation of scientists and engineers.
The school taking the first place this year is the Belize High School of Agriculture (BHSA) from the Orange Walk District who presented a project dealing with the many uses of Sargassum, including beverages and body creams. As part of the first place package, the team leader along with the teacher from the school will travel during the summer to the NASA’s Space Centre in Florida, USA. BHSA will be representing Belize in the upcoming Regional Sagicor Visionaries Challenge. The place and date is yet to be announced.
On Thursday, March 17th, the SPHS held a special assembly ceremony at the school’s auditorium where they officially presented Team Papaya Power to the rest of the school. They were commended for their great achievement and excellent participation in the Challenge.
In the meantime, The San Pedro Sun joins the entire community in congratulating them for their great participation at this year’s challenge. Kudos to All!