San Pedro High School (SPHS) students showcased their knowledge during their annual science fair on Friday, March 24th. The Angel Nuñez Auditorium was filled with 38 project booths that focused on this year’s theme: “Knowledge is Power”. 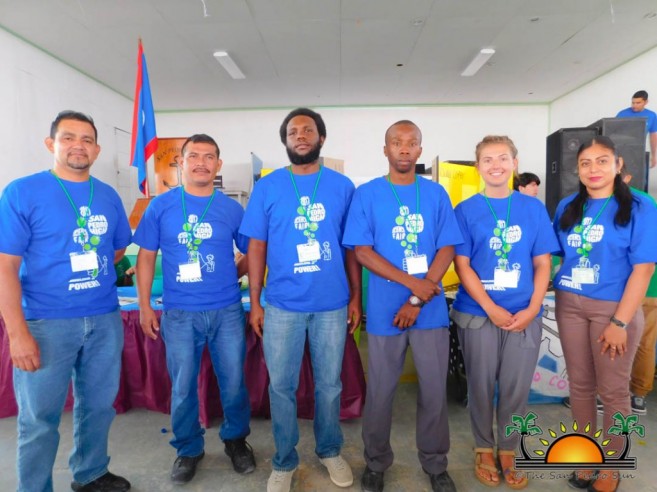 Guest Speaker Justin Romsa, who worked as a meteorologist in the USA, delivered a short speech, encouraging the students to use their knowledge of science to make a positive impact in their communities.

With the fair officially opened, judges, teachers, parents, and visitors came to view the various science projects from 10AM to 2PM. The students eagerly explained their hypotheses, science experiments, observations, research and conclusions. The groups demonstrated creativity, presenting various projects ranging from chemistry, engineering, solar science, physics, and biology. The long periods of investigating, planning, and experimenting certainly paid off, as the judges had a difficult task choosing the winners.

At the end of the fair, certificates were given out to “Aquaponics”, who won the best overall project, and “Stella” for the best banner. In the senior category, “Niox de Coco II” won first place, which proved that electrolysis can take place in coconut water. This year, “Aquaponics” and “Biograss” tied at second place. Aquaponics is a rock system where the waste from fresh water fish supplies nutrients for plants to grow faster hydroponically, while biograss produces energy from seaweed. In this project, Sargassum was transformed into biofuel when it was enclosed in an airtight bio-digester, and then converted into methane gas. “Sea Battery Electrolysis” placed third, which used sea water cells to produce renewable energy and can be used to provide electricity.

In the junior category, “Chichipine” came in first place, which explained that the firebush (also known as Chichipin) helps alleviate high blood pressure, fever, headaches, wounds, and scratches. Coming in at second place was “Petroleum”, which used an oil dispersant to help clean up oil spills. “Catapult” placed third, with their experiment on the elasticity of a rubber band.

The majority of these ideas can be utilized within the country, and can serve as a solution to most environmental issues present today. Congratulations to all of the students who participated in the Science Fair and the staff for making it a huge success!