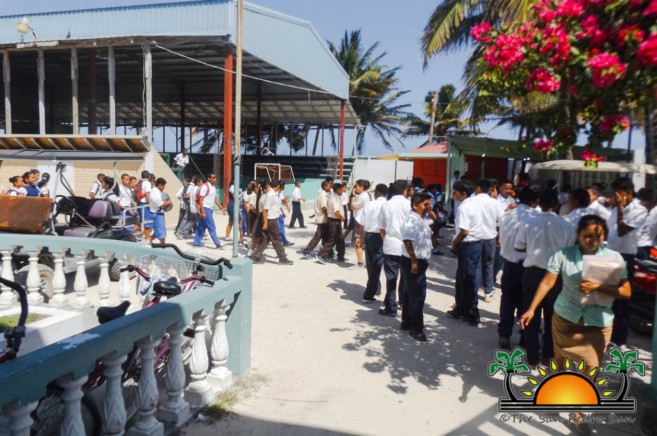 After Standard Six students sat through two days of intense Primary School Examinations (PSE) on April 3rd and May 2nd, the Ministry of Education (MOE) issued a press release with the PSE results on Tuesday, June 6th. This year, a total of 7,271 Standard Six students sat the PSE countrywide, testing their knowledge in the four major subjects of Mathematics, English, Science, and Social Studies. Topping the country with 387 out of 400 total points was Bernice Yorke’s Curt Smith of the Belize District.

With 18 out of the top 25 scorers, the Belize District outperformed the remaining five districts. Orange Walk had four top performers, Corozal and Cayo each had three and Toledo had two, while Stann Creek did not make the 2017 list. As for San Pedro Town, while there were no students in the top 25, there were several students who still did exceptionally well.

Collin Greif of The Island Academy (TIA) and Kiona Sanker of San Pedro Roman Catholic School (SPRCS) both scored 363 points out of 400 total (90.75%). 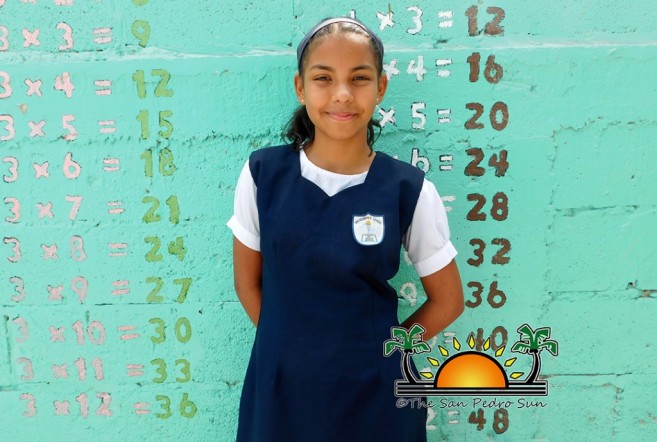 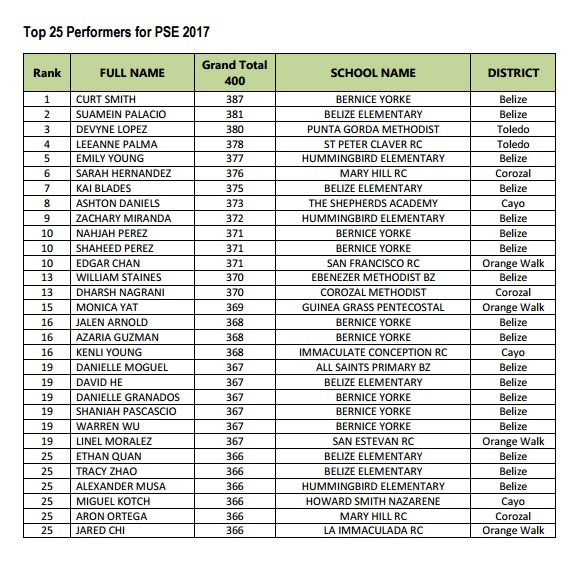 The MOE reiterates that the results of the examination is not intended to be used as the sole criteria to enter secondary schools. However, the PSE serves two main purposes: 1) the certification of students at the completion of primary schooling in four content areas of the primary curriculum; and 2) educational decision-making to inform policy, planning and practice at national, district, school and classroom levels.

In English, half of the students (50%) who sat this year scored a ‘Satisfactory Level of Performance’ (grade C) or better. The mean score remains in the adequate range, with a negligible increase from 57.8 in 2016 to 57.9 in 2017. For the most part, the performance in English has remained very stable, and still shows a slight upward trend.

In Mathematics, approximately 37% of students scored a ‘Satisfactory Level of Performance’ (grade C) or better, which indicated a 2% increase from 2016. The majority (49%) of students’ scores were in the “E” range, which is 49 or below. The MOE states that this is still a concern, despite the 1% decrease from last year. For the past 10 years, the national mean score in Math has remained constant, with spikes in 2008, 2010, 2012 and 2013. While the mean performance in 2017 is just above 50, it is still of great concern that most students are scoring in the grade E band, which represents inadequate performance.

In Social Studies, the scores showed a notable increase in the number of students (31%) whose scores were in the A (Excellent) range. Last year, 21% of students’ scores were in the same range. Since 2014, scores for this subject appear to show slight increases with this year’s mean score (68.1%), which is an increase from last year. A sharp increase within the same range was noted in 2008, and was followed by a sharp decrease in 2009. Since that year, there have been modest improvements in performance.
In Science, this year’s scores decreased significantly. In 2016, 70% of students scored in the Satisfactory or above ranges, while this year’s performance showed only 58% of test-takers in the same ranges. About 13% of students scored in the excellent range, which is a sharp decrease from 28% in 2016.

According to the MOE’s press release, 3,558 (49.8%) of the registered candidates were male and 3585 (50.2%) were female, of which 11 were private candidates. The 2017 PSE numbers show 121 less registered candidates than 2016. Of the 7,271 who were registered for the exam, 194 (or approximately 2.7%) were either fully absent, absent for part of the exam, had ‘Ungraded’ for the English Writing Paper or the Math Problem Solving Paper, had a ‘No Result’ for at least one part of the exam, or a had combination of Absent, ‘Ungraded’ or ‘No Result’ for different parts of the exam.

In an effort to improve the national primary curriculum, the MOE is undertaking remedial action and reiterates that educational institutions must work together collectively. “It is important to note how our students are distributed across the various grade ranges/bands, which is shown in the tables for each subject earlier in this release. All concerned—teachers, principals, parents, managements and the MOE must take ownership for the quality of education in our schools. The MOE continues to expand its efforts to provide relevant and quality education to all children…It is also the responsibility of the managements and individual schools to analyze their own school results to determine areas of strengths and weaknesses and to plan and implement interventions to address the areas of weakness.”

The press release further stated that primary school teachers are being trained nationwide in student-centered methodologies. Through this training, the MOE hopes to improve learning under the Education Quality Improvement Program (EQIP), improve the quality of teacher education programs in development, and create a feedback system that informs teachers on their graduates’ performance. These are among the many projects that are being implemented, and will include initiatives to revise, improve, and provide training to teachers and principals on proper curriculum planning, as well as the attention to student learning outcomes.

The National PSE Awards are due later in June 2016, to honor the top students across the country. The San Pedro Sun congratulates all the students for their efforts!