Singing to tunes from well known artists such as: LeAnn Rimes, Tyros Ryley, Marisela, Freddy Fender, Los Brindis, Ana Gabriel and La Quinta Estación among other, the twelve participants kept the packed Jaguar’s Nightclub well entertained. After the two rounds of competition, it was Claudia Handal who emerged victorious, taking the coveted $2,000 cash prize. Winning her the competition were the songs Rosas from La Oreja de Van Gogh and El Me Mintio by Amanda Miguel. 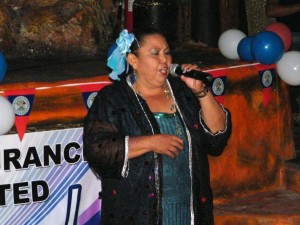 The San Pedro Sun congratulates all participants. The Reef Radio would like to extend a big “Thank You” to all the sponsors, and supporters. Whether they came out to Jaguars, tuned in to Channel 20 or listened via radio, The Reef Radio says THANK YOU for your continued patronage of the program.

Reef Radio TV Productions is also undergoing a new and bold initiative to showcase the many talents of our children on the island with a Children’s Talent Search. The show is geared at children ages twelve and under. The show is looking for children to showcase any talent they choose to display, whether it is acting, dancing, singing, poetry, playing instruments and more. Expect representatives from the Reef Radio to be visiting the various island schools with an invitation to be part of this competition. The process is scheduled for five weeks of televised competition to select the top ten acts, which would go on to the finals. The winning child or group and the school that they represent will win cash prizes. Be sure to stay tuned for more on this exciting new show.