« Older: Fashion show brings in over $10k for Mama Vilma Family Home
Newer: » Another Shade of Blue films on AC


The annual celebration of San Juan Carnaval kicked off on Saturday night, February 18th. The festival commenced with a block party at Central Park with various dance presentations by the San Pedro Dance Company.

Following the dance presentations, it was time for the crowning of Miss Carnaval 2012-2013. With initially three young ladies vying for the title – the competition was cut when two stepped down, leaving one individual representing. 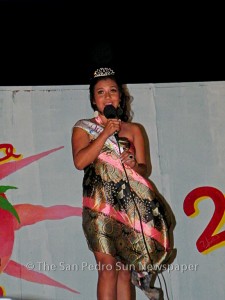 In the category for the best decorated booth; Bayside Bar and Grill took the prize, with their Carnaval theme and colorful decorations. Best Carnaval platter went to the Blue Hole Restaurant for their Pork Pibil and best Carnaval drink went to Nicti-Ha, with their concoction, dubbed the “Blue Sacrifice”, a delicious combination of Vodka, lime, sugar and Gatorade.

The opening ceremony for Carnaval 2012 was well attended by residents and visitors alike. Sunday February 19th marked the first day of painting and Comparsas. Children and adults alike took to the streets to participate in the comparsas and the tradition of painting on the streets. Carnaval continued through Tuesday, February 22nd.

Carnaval concluded on Tuesday, February 21st with all comparzas marching around town offering their cultural, energetic and colorful dances to onlookers. Painting went well into the night and the announcing of the winners of the comparzas was held around 11PM at the Central Park.

This year, seven groups competed in the comparzas, four in the adult category and three in the junior category. Throughout the three days, judges observed all groups and judged them on originality of costumes, group organization and energy. Judges were located at strategic locations throughout the parade route.

In the Senior Category, San Pedro Aids Commission tied with Flora Ancona’s group for first place, each taking home $1500.00. In second place was Cholo’s Barbies who took home $800.00. In the junior category; Little Dynamic Stars took first place and won $600.00, while Isla Bonita and ACES tied at second – each winning $500.00.

While Carnaval is a time for friends to gather and join in a tradition that has been passed down from generations here on the island, some revelers took it upon themselves to intentionally deface public and private property. This practice has become noticeably prevalent over the past years, and this year was no different. Vehicles have been vandalized, and signs that were covered, were intentionally uncovered and defaced. Carnaval participants are encouraged to respect the rules that are in place for a safe practice at Carnaval Time.