« Older: Scottish toy pirate ship, A2, sailing off the coast of Cuba
Newer: » Calendar of events for the San Pedro Lobster Festival announced


On April 3rd, KalyagenTM released The Stemregen Effect, the first in a series of social media ads featuring former UCLA Bruins and NBA players, Nigel Miguel, Marques Johnson and Mitchell Butler as part of their STEM THE TIDE OF TIME campaign. The campaign is to promote STEMREGEN®, a natural stem cell enhancer that has been documented to increase the number of circulating stem cells by stimulating Endogenous Stem Cell Mobilization (ESCM) thereby supporting the body’s natural ability to repair and stay healthy. 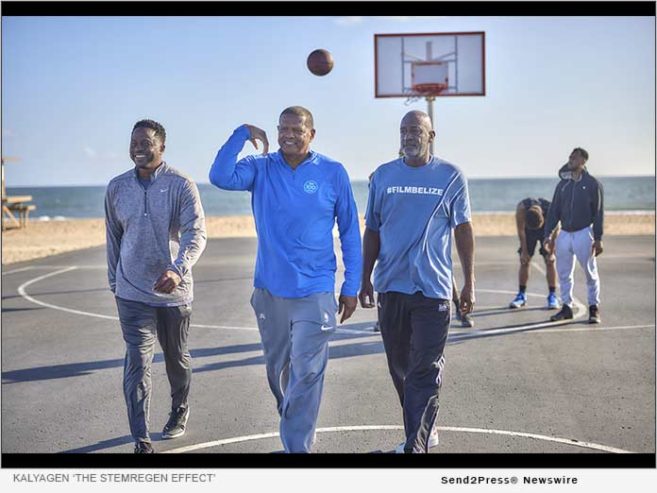 “We were delighted to have three generations of former NBA players participate in the first ad of our “Stem the Tide of Time” campaign,” said Christian Drapeau, CEO and Chief Scientist of Kalyagen™. “We are doubly pleased to be able to showcase this ad as these three former UCLA basketball standouts celebrated UCLA’s appearance in the Final Four and demonstrate how Stemregen has been able to help them to stem the tide of time.”

Nigel Miguel is the first Belizean to play in Division I sports in the US. In his final season with the UCLA Bruins, Mr. Miguel earned All-Pac-10 honors and was also named Pac-10 Defensive Player of the Year while helping lead the Bruins to the 1985 National Invitation Tournament championship. According to Miguel, “Years of jumping and running up and down high school, UCLA and NBA floors have taken their toll on all of us. I couldn’t be happier to show what ‘Stem the Tide of Time’ means for me along with my former UCLA colleagues, Marques and Mitch, at the same time the Bruins were about to play in the Final Four. And yes, Marques can still dunk at 65!”

Best known for his acting role as “Dwight the Flight” in White Men Can’t Jump, Mr. Miguel has also been in numerous television and movie productions, both in front and behind the camera. He is also the current Film Commissioner of Belize.

Carnival Road March 2016: A parade of Patriotism and Culture!