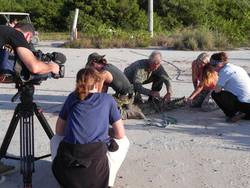 To date, sixteen American crocodiles have been caught, measured, sexed, and re-released as part of an ongoing croc population survey on Ambergris Caye by American Crocodile Education Sanctuary (ACES). The first two weeks of February were spent in the San Pedrito area. While eleven crocs of various sizes were sighted, ACES was only able to catch two of the crocs. This fact shows that the residents of San Pedrito are not feeding the crocs directly or indirectly and doing a great job of co-existing with these apex predators.

The ACES team was also very excited to observe five endangered Roseate Spoonbills while scouting for crocs. The biodiversity of Isla Bonita is amazing. The fact that these rare birds coexist with crocodiles in mangrove habitats displays the importance of the habitat quality and habitat availability is a key component in ACES research. Data from the study will provide the bases for possible limited land development in areas, and improved protection of mangrove habitats. ACES would like to thank Island Construction for their continued support during the San Pedrito field research.WASA Lagoon Relocation Effort to Protect the Crocs

A new view at WASA lagoon is yellow caution tape protecting a croc trap set by ACES in an attempt to catch and relocate the mating problematic crocs there. On Saturday night (Feb. 19th) while setting the trap, expert croc behaviorist and wrangler, Vince Rose, and ACES apprentice, Chris Summers snared a seven-foot female croc.

Everyone at the capture was appalled when they realized that over one-third of the animal’s tail was missing from a clean machete cut by a human. Why would anyone do this? Most likely it was chopped off and sold on the black market for food. While the croc fortunately appeared to be healing well, the severity of the wound very easily could have been fatal.Sadly enough, this hasn’t been the first time ACES has had to relocate a crocodile in order to protect it from humans, instead of the other way around. Not only was the act brutal, but illegal. South Ambergris Caye Neighborhood Watch Patrol is doing a fabulous job of keeping the illegal feedings from occurring, but they cannot be there every minute of every day. Anyone seeing any illegal crocodile activities please call ACES at 631-6366.

The rescued crocodile was transported by boat to a remote area in the northwest lagoon area by Captain Ivan, who generously donated his time to help. The WASA Lagoon Croc Relocation Effort is sponsored by Grand Belize Estates. To find out how you can help email [email protected]

ACESThis past weekend ACES was the one being captured. A film team who is producing a documentary for a public television station in Paris, France has been in Belize for the past two weeks. Starting in Punta Gorda with capturing the beauty of the Tamash River, they ended up in the Cayo District filming a veterinarian/wildlife rehabilitator, Dr. Isabelle Paquet-Durand. Moving here from Germany over seven years ago, Isabelle has taught at Galen University and is now working on establishing Belize’s first fully equipped wildlife rehabilitation center in Cayo. She is also the founder of the Belize Wildlife Conservation Network.
The documentary is focused on three individuals in the country and the work they do here. Having never been to the island before, Isabelle decided to bring the film crew to Ambergris to see the work of ACES and to hopefully assist with the re-release of a rescued crocodile. She did just that and more. On Sunday night the ACES trap at WASA caught a croc. While the croc was being pulled from the net the scene went from routine to dramatic when the croc’s gapping jaws became tangled in the net. In fear of the croc drowning, Vince had to enter the net with the nine-foot crocodile to get her free.

Once the croc was safely restrained it was observed that a recent bite wound that was in the process of healing had split back open. A larger female fighting for nesting grounds most likely inflicted the original six-inch gash on top of the crocs head. Luckily, Dr. Isabelle was on location to stitch the wound closed and apply antibiotics. The crocodile was held overnight in the yard of friend and editor of The San Pedro Sun, Tamara Sniffin, to be observed overnight.Monday morning the croc was transported north and re-released in a remote mangrove area. Because it had been attacked in WASA by a larger croc, ACES believes the croc will not return, but instead will find a new niche.