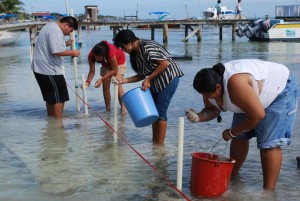 If you have been living on the island for a while, chances are you are aware of the controversy surrounding the cutting down of mangroves and dredging along coastal areas during large development projects. Often times, it’s because these developments prefer white, clean, sandy beaches or they choose to replace the mangroves with concrete retaining walls. There is one organization on Ambergris Caye that is pushing for a change in this mentality by promoting the planting of mangroves. A little over a year ago Coral Reef Alliance embarked on a mangrove restoration project using the Riley Encased Methodology approach to see if it can be adopted to restore red mangrove on the eastern coast of the island.

According to Valentine Rosado of the Coral Reef Alliance, in December of 2010, they established three pilot sites using Riley’s method. According to Rosado, in one of the three places, all their mangrove propagules have been uprooted from the encasement, but in the other two sites the rate of survival is between 90 to 95percent. “The whole idea is to effectively show how to use Riley’s method and to change people’s perception. We want to get the local residents to integrate mangrove as part of their coast and even as part of their development. One of the important parts of it however is to educate people that it actually works and establish good examples,” explained Rosado.

Environmentalists as well as scientists have claimed that where mangroves have been cleared and replaced by attractive beaches and or concrete sea walls there is rapid beach erosion. This is an environmental problem that continues to be a very serious problem on Ambergris Caye. “We decided to start a campaign to show people that if you remove the mangroves, you lose the beach and if you lose your beach you lose your coast. What’s the sense of having the view of the sea if you don’t have the actual beach? You can put in sea walls but that is a temporary structure that is expensive and leads to erosion. What is good about the mangrove is that it builds the beach; if you do proper landscaping of the mangrove you keep your beach and you keep a beautiful view,” exclaimed Rosado. 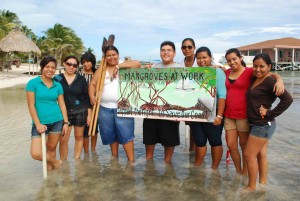 One such resident that is excited and has been involved in the mangrove restoration pilot program is Bob McClain. According to McClain since living along the beach he had to deal with the erosion problems. “I have dealt with the erosion and I know what a problem it can be. I think the mangrove is a wonderful solution to that, if I can get them to grow,” said McClain. Of the 40 mangrove propagules in the encasements that McClain has in front of his beach front property, 38 have survived to a one year plant.

Beside the two pilot sites that have proven successful, Coral Reef Alliance, with the assistance of two different sets of San Pedro students have started two other demonstration sites. One of the sites is at Boca del Rio next to the park which has eight-month-old mangroves in tubular encasements and the other site is located on the beach in front of the San Pedro High School which has propagules that are three-weeks old and are also in tubular encasements.

Anyone interested in having their beachfront restored with mangrove as part of the program can contact Guadalupe Rosado at Coral Reef Alliance. 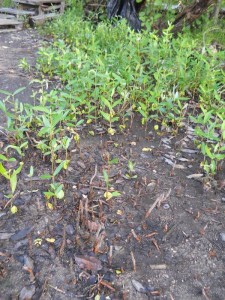 Black Mangrove, scientifically known as Avicennia Germinans, is common to Belize. On Ambergris Caye the presence of the black mangrove is no exception, only that it is cleared in abundance to give way to new costal developments. Any attempt to restore the lost mangrove is a good start to alleviate the environmental issues that comes along with the clearance of mangrove. One person that is calling on the citizen to take advantage of the availability of black mangrove propagules is Janet Brown, Chairperson of the Marco Gonzalez Maya Site.

According to Brown, about two months ago, the black mangroves along the water line of the Marco Gonzalez Archaeological Reserve dropped its’ annual seeds. The seeds have now turned to hundreds of propagules that are about six to eight inches. “It would be a shame to pull them up and destroy it when someone in need can come harvest the seedlings and replant to beautify a new area,” said Brown.

Because the hundreds of black mangroves will eventually impede the access to the site, Brown fears that they might have to pull them out before they grow bigger. Brown is encouraging anyone who has an interest in planting black mangrove as part of their landscape to get in contact with her.