BOISE, Idaho – Two rare falcons from Central America have recovered from a near-fatal attack of bot flies and are safe in a Peregrine Fund facility, thanks to the herculean efforts of numerous government agencies, veterinary experts, and conservation groups determined to save a remnant population of Orange-breasted Falcons from extinction.

Bot flies (Philornis species) are parasites that lay their eggs in the skin of animals. When the eggs hatch, the larvae feed on the tissues of the host animal, often with fatal results in young birds. 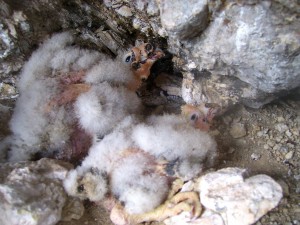 “We found the dying chicks in a semi-conscious state during routine banding operations in the Maya Mountains of Belize,” said Robert B. Berry, Orange-breasted Falcon program director for The Peregrine Fund, a non-profit focused on conservation of birds of prey. “Some authorities suggested euthanasia.”

Berry and his team, who regularly monitor Orange-breasted Falcons in Belize and Guatemala, opted to save the rare birds with the help of medical experts in the United States and Belize. After a week of hands-on treatment, the chicks had regained their sight, were eating well, and on their way to recovery. 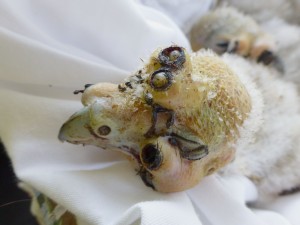 “Nonetheless, we faced a dilemma, as both the literature and our medical experts opined that the chicks were unlikely to survive if they were released, something we had not considered,” said Berry, a lifelong falconer and raptor breeder who raises Orange-breasted Falcons in captivity for release to the wild. “I believed the chicks would be a valuable addition to the captive breeding program and provide long-term data on the impact of bot fly infestation.”

The researchers had just two weeks to arrange a complex array of permits for a return flight to The Peregrine Fund’s captive-breeding facility in Sheridan, Wyo., aboard a private aircraft supplied by LightHawk, a volunteer aviation group that donates flights for conservation projects.
“With multiple government agencies in two nations involved, permits seemed impossible,” Berry said, “but we were wrong!”

He said The Peregrine Fund’s impeccable credentials were key and the horrific images of dying chicks were compelling.

“We are extremely grateful to everyone who assisted with the recovery effort, especially the government agencies in Belize and the United States that made decisions with incredible swiftness so that all permits and medical certificates were in hand before the scheduled return on June 14,” Berry said.

Orange-breasted Falcons after treatment for bot fly infestation; Photo by The Peregrine Fund

He said the chicks are now growing rapidly in a secure, federally approved private quarantine facility, awaiting test results that will allow them to move to permanent quarters.

“The chicks are healthy and are nearly able to fly,” Berry said. 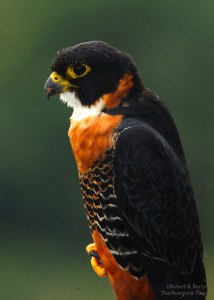 Orange-breasted Falcon; Photo by Robert B. Berry, The Peregrine Fund

The Orange-breasted Falcon is a brilliantly colored, medium-sized tropical counterpart of the American Peregrine Falcon. For more than 20 years, The Peregrine Fund has studied the small, isolated and declining northern population in Belize and Guatemala. A captive propagation and release program has worked to restore the beleaguered population, which now numbers fewer than 30 pairs occupying just 4 percent of its former range in Central America.

The following organizations and individuals contributed to this effort:

U.S. Department of the Interior – U.S. Fish and Wildlife Service