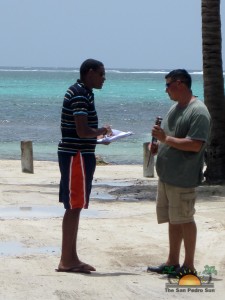 Six students along with two professors from the University of the West Indies “Institute of International Relations” in St. Augustine Trinidad and Tobago were on the island for a  little more than two weeks conducting a survey on the effect of climate change on the island. The survey was done by the Sir Arthur Lewis Institute of Social and Economic Studies (SALISES) working in conjunction with the Telfer School of Management coming out of the University of Ottawa, the Coastal Zone Management Authority and Institute of Belize and the Coral Alliance of Belize.

According to Dr. Marlon Anatol, of the UWI, the various entities joined forces and decided that they wanted to try to measure the effects of climate change on San Pedro, particularly with the rise in sea levels and floods. As a result they have come up with a research instrument which seeks to measure people’s opinion, the awareness and the general perception of climate change.

The team of eight members, Dr. Raymond Mark Kirton, Dr. Marlon Anatol, Nia Nanan, Juval Daniel, Stefan Haynes, Shivonne Pariag, Kurtly Ravello and Stefan Affonso hit the streets on July 11th and wrapped up their surveying on Thursday July 26th. All students are either in the Masters or PhD Program. 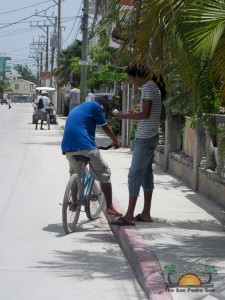 The team set out to conduct 1,050 surveys with individuals from the various sectors of the island, going house to house. In speaking of her experience, interviewer Nia Nanan stated, “We went house to house to find out people’s perceptions, perspectives and take on climate change and its impact on San Pedro, and a little bit of socio economic data as well. It’s been fun. San Pedro is very, very fun. Most of the people are very friendly. The large majority of the people are willing to answer the questions of the survey compared to when we do it on other islands; a lot of people tend to brush you off sometimes.” Their raw data has been surprising, “A lot of people don’t really know much about climate change, which is what we didn’t expect, given that it’s such a small island. But they are willing to learn and they have very contrasting views sometimes. It was very interesting.” As for how difficult a task it was, the students certainly could agree that working on La Isla Bonita was a delight. “In terms of topography, and logistics, it’s very easy to maneuver on the island. The island is very beautiful. It was at times hard to stay focused on work when you’re working on the beach all the time, but we managed,” continued Nanan.  Even though a little rain did dampen their progress, they certainly didn’t give up, and as their presence became more familiar, people opened up and work moved fairly quickly.

Dr. Anatol believes that the survey conducted in San Pedro has been very successful, in the most part owed to the kindness and willingness of the population to cooperate in taking the surveys. From San Pedro, the team moves on to Belmopan where they will be conducting a survey on Neighborhood Safety. The team returns to Trinidad on August 12th.

The San Pedro Sun wishes the team much success in their future surveys in the country and we are eager to hear about their findings here on La Isla.