This year marks the fourth consecutive year that turtle monitoring is being conducted on the northern beaches of Ambergris Caye. Monitoring of the turtles is done during the turtle nesting season which runs annually from May through November. This year however, nesting started a few weeks earlier than expected and with the season at the midway point, already more nests have been found than in 2011.

The monitoring of turtles is conducted jointly by the staff of the Bacalar Chico Marine Reserve and National Park and Hol Chan Marine Reserve (HCMR). Marine Biologist for HCMR Kira Foreman told reporters during a field trip on Friday July 27th that not only did the nesting season kick off early but there is also a large increase in the amount of nests found as compared to figures over the past three years. “This season seems like the best so far in terms of the amount of nests found,” said Foreman. As of July 31st, 65 turtle nests have been documented with approximately 14 nests already hatched. For 2011, a total of 43 nests were found during the entire nesting season.

“At one time all of Ambergris Caye was known to be a nesting beach for turtles in Belize but now turtles are confined to smaller beaches due to the rapid development,” explained Foreman. In the past only two types of turtle have been documented to nest on the northern beaches of Ambergris Caye, the loggerhead turtle (Chleonia Caretta) and the green turtle (Chleonia Mydas). This year is the first time in the four years of monitoring that Hawksbill turtle (Eretmochelys imbricata) nests were found on northern Ambergris Caye. “For the first time in the four years that we are doing this monitoring, we found two hawksbill turtle nests and the eggs have hatched,” said the marine biologist. Hawksbill turtles are listed as a critically endangered species under the International Union for Conservation of Nature (IUCN). 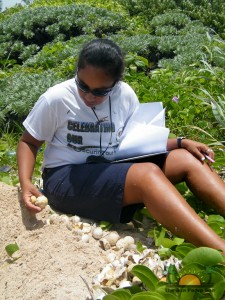 While monitoring is mainly concentrated along the Robles Beach and Rocky Point Beach, this year nests were found on the Basil Jones and Punta Azul beaches. Once a nest is found the team, comprising mainly of marine biologists, take a look at the eggs to estimate when they were laid and the expected hatching date. The turtle nest is marked using a GPS to prevent the wider public from locating the nests. Depending on the species of the marine sea turtle, eggs can take between 40 to 90 days to hatch.

Even though finding the turtle nests seems  positive, there is a major concern; residents are poaching turtle eggs for consumption and so far at least four nests were discovered to have been poached by humans. “One of the things we are finding is that there has been an increase of people poaching turtle nests. Four nests south of Basil Jones were poached by humans. We know its human and not animals because of the characteristics in which the poached nests have been found. We just want to remind the public that sea turtles are internationally listed as endangered and it is illegal to have turtle eggs and turtles in their possession,” said Foreman. Under the Laws of Belize, it is illegal to be in possession of turtle carcasses or eggs since turtles.

Monitoring is conducted throughout the turtle season until the last recorded nest has hatched. The team of biologists combs the beaches searching for nests after which it is marked and monitored during the course of the season. Once the turtles have hatched the biologists inspect the nest to determine the species, count the remaining unsuccessful hatchling and egg shell which will determine the clutch size, hatching success and emergence success.

Residents are being asked to report any citing of turtles on the beaches or human pouching of turtle nests to the Hol Chan Marine Reserve at 226-2247 or 2262420. Park rangers continue to monitor the beaches along with law enforcement agencies to collect data that are used to measure and analyze turtle populations in Belize. Female turtles are known to return to nest on the beach that they were hatched on. It is estimated that only one in every 1,000 turtle hatchlings survive to sexual maturity.