“Celebrating the 20th Anniversary of Protecting Hawksbill Turtles in Belize, 1993-2013”

On May 23, 2000 the American Tortoise Rescue launched an annual celebration of all turtles – sea turtles, land turtles and rivers turtles. 2013 marks a very important milestone for Belize since the hawksbill sea turtle has been protected since 1993 or 20 years! In fact 2012 marked the 10th anniversary that all sea turtles have been protected in Belize. These two milestones are great accomplishments by the government and people of Belize and everyone is asked to respect and celebrate these historic events.

Turtles have been extremely important in the history of Belize. In the 1700s when Belize was first being settled sea turtles were kept in turtle corrals on St. George’s Caye. Look on the back of the $5 dollar bill and you will see a map that identifies turtle corrals around the island. Turtles were an important source of protein to the early settlers, and likely became Belize’s first fishery export. Turtles can remain alive on their backs for weeks, so on the long journey across the Atlantic Ocean to England there was available a fresh source of meat for the sailors transporting logwood and mahogany. You all probably heard about the important of these two industries in early Belize but may not have realized the important roll sea turtles played at this time.

Sea turtle soon became a delicacy in many kitchens across Europe and the shell of the hawksbill turtle desirous in the making of hair combs, eye glass frames, jewelry boxes and jewelry. The ships returned the Caribbean to specifically harvest sea turtles and within a couple hundred years populations were so diminished that the big sailing ships harvesting turtles were not longer profitable and they stopped coming to harvest sea turtles in the Caribbean. But the harvest and trade of sea turtles continued by turtle fishermen to supply the local market, which is a very important part of our cultural history in Belize.

Scientific studies indicated that the turtles were becoming in danger of becoming extinct and thus regulations controlling their catch were implemented, until 1993 when the Fisheries Regulations prohibited the capture of hawksbill sea turtles and then in 2002, prohibited the capture of ALL sea turtles. The only legal way someone could harvest a sea turtle would be to apply for a permit from the Fisheries Administrator for special permission for cultural use.

As a result of the laws protecting sea turtles, they are now regularly observed by tourists visiting the reefs who admire these charismatic creatures. In fact observations submitted to the Belize Sea Turtle Census in 2011 reported that the most abundant sea turtle is the hawksbill turtle! The tourism industry is an extremely important to many people and businesses located through Belize which makes sea turtles more important alive than dead. One sea turtle can be sold for BZ $100, whereas tourists spending a day on the reef will often spend much, much more, and more people will benefit! 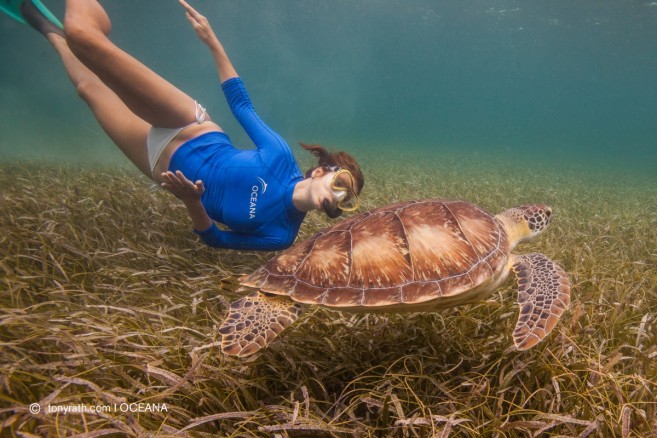 It’s hard for some people to change their diets, but the law now protects sea turtles and has been for the past 10 years and it is time that we all begin to abide by the laws and respect the sea turtles, the great ocean migrators of the seas.

How can you help? Coastal property owners can Adopt A Beach, keep it turtle friendly, and submit regular reports on sea turtle activity on your beach. Dive centers and marine guides can Adopt A Reef and submit regular reports on their observations of sea turtles to aid in abundance surveys. Teachers can include celebration of World Turtle Day and World Sea Turtle Day in your classrooms. 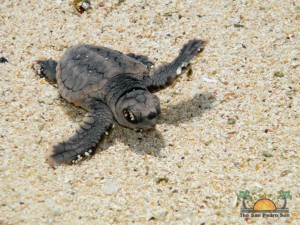 That’s right! World Sea Turtle Day was recently founded on the birth date of Archie Carr, a man well known for protecting the green sea turtle colony at Tortuguero, Costa Rica, where many green turtles that forage in Belize nest. Archie Carr founded the Brotherhood of the Green Turtle, a project which released hatchlings in Belize in 1958 at Caye Chapel and Northern Two Cayes (Lighthouse Reef), and which later became the Caribbean Conservation Corps and more recently the Sea Turtle Conservancy, an organization based out of Florida but also work within the Caribbean.

Everyone, please help us celebrate World Turtle Day on May 23 and World Sea Turtle Day on June 16 in Belize by sharing information with your friends and family as we take great pride in Celebrating the 20th Anniversary of Protecting Sea Turtles in Belize! This is a wonderful time to raise awareness on the importance of sea turtle conservation as turtle nesting season approaches!