Hol Chan Marine Reserve has released the Ambergris Caye Marine Turtle Program survey report on sea turtles for the year 2013.The report indicates that while last year saw the largest number of nests recorded on the northern portion of the island, hatching success went down by over 11% in comparison to the previous years. Weather is believed to have been one of the major contributing factors as sea surge from storms during the hurricane season damaged nests along the beach.

The Ambergris Caye Marine Turtle Program observed turtle nesting from mid-May to late November on northern Ambergris Caye. Efforts were concentrated on Robles and Rocky Point beaches – areas that have seen the most activity throughout the years. Generally, three native turtle species’ nests were studied; the Loggerhead turtle (ChleoniaCaretta), the Green turtle (ChleoniaMydas) and the Hawksbill turtle (Eretmochelys imbricate). 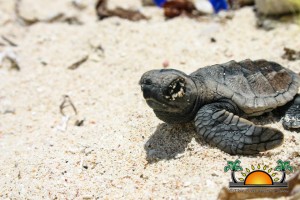 The report, which was released on Friday January 17th, said that last year was the fifth consecutive year that Hol Chan Marine Reserve staff has been collecting data through the turtle monitoring program. It indicates that nesting efforts are concentrated to the northern portion of the island, specifically near Robles Point and Rocky Point beaches. However, a loggerhead turtle nest was found approximately four miles north of San Pedro Town on a private property near a pool. Three nests were also found near Basil Jones area and according to the report, it gives strong credibility to the theory that the entirety of Ambergris Caye was once a nesting beach. This is possible because while turtle spend most of their lives migrating, with hardly any evidence of their behavior while on their migratory life, they always return to their hatching beach to nest.
“A total of 96 nests were observed for the 2013 nesting season, and it is believed that there were a few true nests that were not observed. This has been the largest number of nests recorded in Ambergris Caye in recent history…. Robles beach with 62 nests had the highest number of nests. There was a large increase in nesting activity at Rocky Point. There were 30 nests found at Rocky Point, the same number as found in 2012. There was also oneHawksbill turtle nest found at Robles Beach, which indicates that the beaches in Ambergris Caye are not key to Hawksbill nesting, they only occasionally nest there. During 2012 there were three Hawksbill nests found at Rocky Point,” the report explains.
But while there was an increase of nests last year, determining the clutch size and hatching success is fundamental to the conservation and management of sea turtles because they assist in understanding the suitability of the beach which acts as an incubation system as well as the general health of the nesting population.

2013’s hatching success went down when compared to 2012’s turtle season. “There was a decrease in hatching success which went from 63% in 2012 to 54.9%, and emergence success remains stable at 49%. The majority of eggs, 49% hatched and hatchlings emerged from the nests on their own successfully. 32.7% of the eggs that were laid at all nesting sites remained undeveloped. 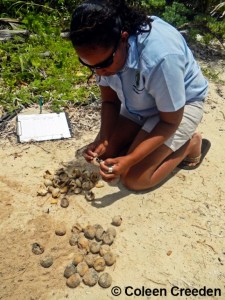 9.2% of the eggs laid developed into a turtle but did not hatch; they died at some point before emerging from the shell. 2.8% of all eggs developed into a turtle, began hatching but did not completely leave the shell. Another 0.98% had hatched successfully but could not make it to the surface and died. 4.7% of all eggs laid hatched but could not make it out the nest and were assisted by persons conducting the monitoring in getting them out of the nest.” It is believed that weather impacted some hatching since a few nests had to be relocated after it was threatened by sea surge, while a few were damaged.
According to the report, over the past three years, the number of sea turtles nesting at Robles has been increasing. It says that while Robles beach has seen a steady increase in the number of nests per year, Rocky Point beach, which is the smaller of the two beaches, has seen a more stable number of nests per year. The nesting density at Rocky Point is higher due to the size of the beach not because of the number of nests being laid.
In 2012, there were a total of 85 nests that were recorded in the areas of Robles, Rocky Point, Punta Azul and Basil Jones areas, while in 2011 there were only 43 nests.
While monitoring turtle activities on the island is the program’s prime focus, it also dealt with nine stranded turtles which were either brought into the Hol Chan Marine Reserve office, were found washed up and weak on the beach or found dead. In 2013, one of those turtles died, while eight were rescued alive and in various health conditions, some hurt by other marine life, but they were all cared for. Most of the eight have been released into the sea.

It is estimated that one in every hundred turtles makes it to sexual maturity, living up to 80 years in the wild. The Hawksbill is the most endangered species in the Caribbean, and the proper conservation of its nests is essential to preservation. In Belize, sea turtles have been a protected species since 1993, and the disturbing of turtle nests or possession of sea turtles is illegal. The selling or trafficking of any sea turtle can constitute an infraction that can result in a fine of up to $1,000 and up to one year imprisonment.