The crisis at the New River in the Orange Walk District has prompted the Department of Environment (DOE) to look at viable alternatives to save the heavily polluted water way. Due to the build-up of Hydrogen Sulfide (H2S) in the water, wildlife has suffered and residents living near the river are also facing health dangers. In an attempt to save the stream, DOE began an ambitious project on Tuesday, September 9th, installing aerators to try to re-oxygenate the water in parts of the river. Up to now, this effort has shown encouraging results. Meanwhile the Macal River in western Belize is exhibiting high levels of mercury in certain fish species. The Ministry of Health (MOH) is advising people living nearby to be cautious when consuming fish from the river. 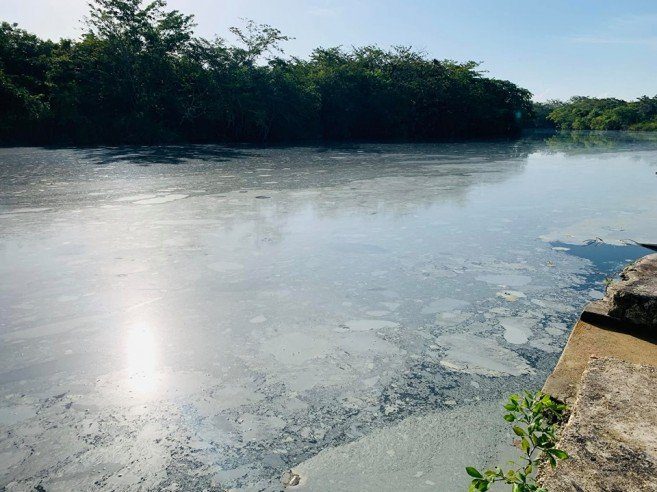 The deployment of the aerators at the New River was a combined effort with Belize Natural Energy and the Big Creek Group in Southern Belize. The method to pump oxygen into the river seems to be the most effective immediate action, but the concern is that it could cause further sediment disruption and release other toxic elements trapped in the river bed. According to an expert in the topic from the State University of New York, Dr. Guy Lanza, DOE should sample and analyse the sediments before aerating the river. He believes that there may be large quantities of H2S on the river bed due to the eutrophication that has affected the waterway. His concern is that the aerators could stir up the sediments, releasing the dangerous toxins and gases into the water and atmosphere, further threatening the local eco-system and nearby residents, including students at the nearby La Inmaculada Roman Catholic School. 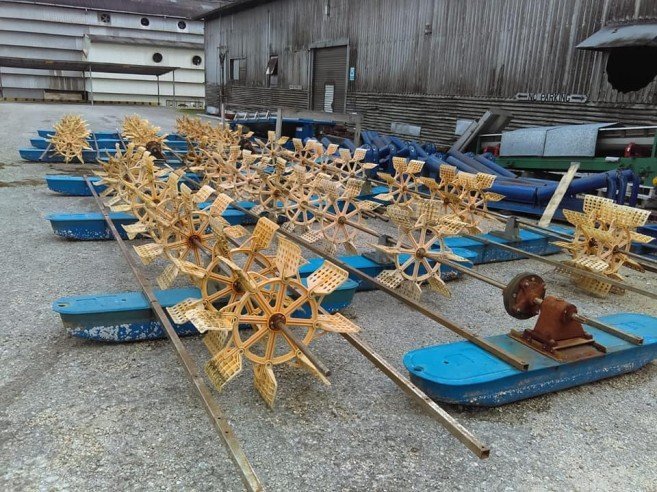 Aquatic Ecologist, Dr. Ed Boles, has been following the situation, and he told media that the aerators are the immediate solution at the moment. “There could be a little bit of sediment disturbances depending on how deep the water is, but that should all subside if it actually works, as oxygen is pumped back in the water,” he said. Boles added that addressing the crisis is no quick fix, but rather a long term one.
DOE’s Anthony Mai and a team have been monitoring the works of the aerators and said that the process is showing some improvement. “The top layer of the water is cleared up a bit,” he said. “We have the aerators a distance apart to monitor their performance. We are checking the water quality and the level of H2S before installing these devices. We look forward to installing more in other parts of the river.” He cautioned anyone using the river on a boat at night to be mindful that there are aerators protruding a few feet out on the water. DOE has toured the river all the way to its mouth, and reports are that the situation appears to be improving quickly. 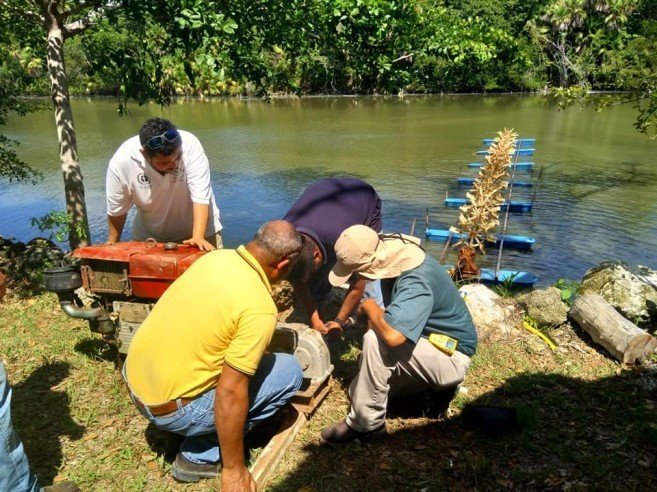 Those affected along the river route include La Inmaculada Primary School, which had to cancel classes on September 4th, due to the unbearable stench of gases coming from the waterway. They cautiously resumed classes on Wednesday, September 11th. Alarms have been installed on the school grounds that should signal if there is a high level of harmful gases (H2S) in the air. The alarms have been quiet, but if it does happen and the toxic smell returns, the school is looking at dismissing students earlier than normally scheduled. The administration is also looking at the option to cancel classes once more or even relocate if it becomes necessary.
The crisis affecting New River came to head in late August, when disturbing images surfaced showing large amounts of fish and even crocodiles and turtles turning up dead. This condition in the river is believed to have been caused by the dumping of waste from agricultural companies. With little to no monitoring in place, pesticides, fertilizers and other chemicals have apparently been dumped into the river. Some of the alleged culprits named by affected residents include construction companies and the multi-national sugar factory as the primary entities responsible for the eutrophication in the river. 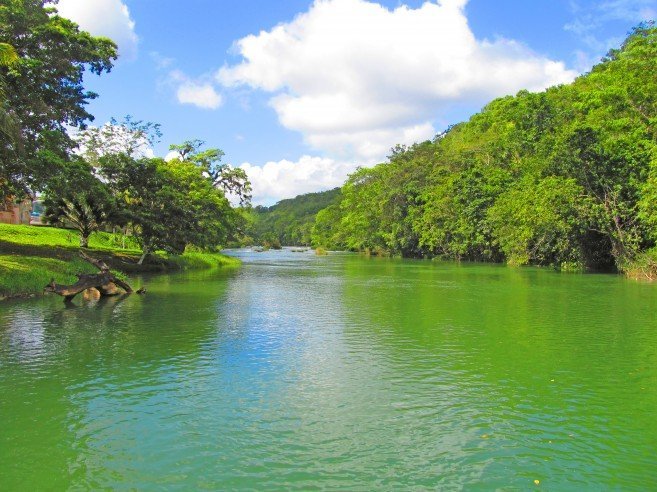 While the New River seems to be recuperating, the western Cayo District’s Macal River is showing signs of issues. After analyses for mercury were done by MOH along with Belize Electric Company Limited on the said river, they discovered only three of 18 fish species tested with mercury levels above the recommended dose of 0.5 mg/kg. The species were identified as Botasi, Cichlid and Bay Snook. The Botasi was found to contain almost twice the recommended level of mercury for consumption at 0.95 mg/kg. The Cichlid contained 0.71 mg/kg, while the Bay Snook had 0.83 mg/kg. If people do consume any of the mentioned species, MOH advised that weekly amounts of fish allowed to be eaten should be monitored. It is recommended on a weekly basis only 1.7 ounces of Bay Snook should be consumed. In the case of Botasi fish the recommended amount is 4.7 ounces and 2.8 ounces of Cichlid. The Ministry also gave suggestions on replacements options. They recommended eating fish from other locations in the country, eat replacement foods such as local chicken, pumpkin seeds, sesame seeds, nuts, avocados and spinach. The use of oils from flaxseed, canola, corn, olive and soybean. These items are considered replacements for the omega fatty acids found in fish.
Of importance to note is that all other fish tested around the area had acceptable mercury levels. MOH said they will continue monitoring the situation.

Letter to the Editor: UB Condemns destruction of Noh Mul