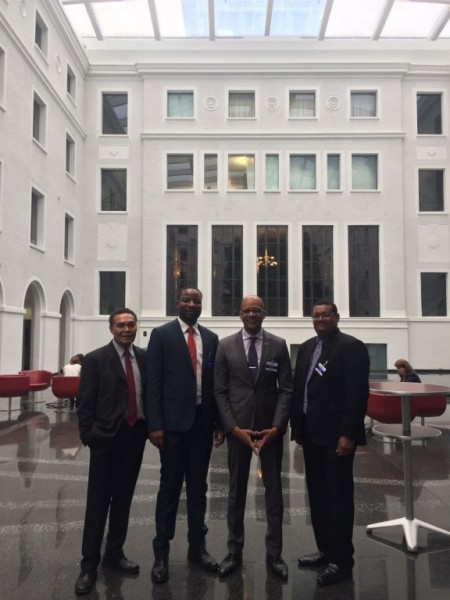 The TPR is a requirement under the WTO Agreement, which was signed in 1994 and enacted in 1995, through the Trade Policy Review Mechanism (TPRM). This review seeks to analyze the trade policies and practices of WTO members and its impact on the functioning of the multilateral trading system. The TPRM is basically a periodic transparency exercise, where WTO evaluates member adherence to the multilateral rules of trade adopted under the WTO Agreement. 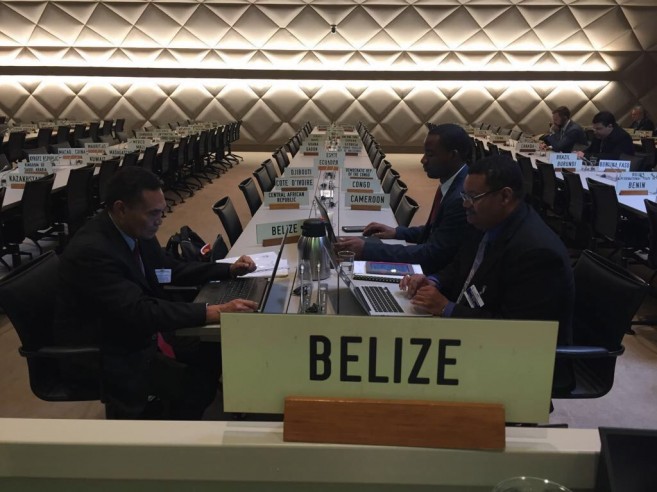 Belize is a founding member of the WTO and has already undergone two previous reviews in 2004 and in 2010. The third review included two country visits by the WTO Trade Policy Review Division to Belize for consultative meetings with national authorities. The report prepared by the WTO Secretariat was supplemented by another report prepared by the Government of Belize. Both were circulated to all WTO members, who had the right to pose questions directly to Belize. Response to questions were prepared and then submitted to the WTO. The process concluded with this two-day meeting at the WTO Secretariat in Geneva, where Belize had the opportunity to respond to questions from members in attendance.
The meeting included Belize’s major trading partners, such as the European Union (still representing the United Kingdom), the United States, Mexico and Guatemala. The review panel included the Chairperson, Irene Young, Hong Kong’s Permanent Representative to the WTO, the Discussant, Ambassador Peter Matt, from Liechtenstein, and Willy Alfaro, Director of the WTO’s Trade Policy Review Division. 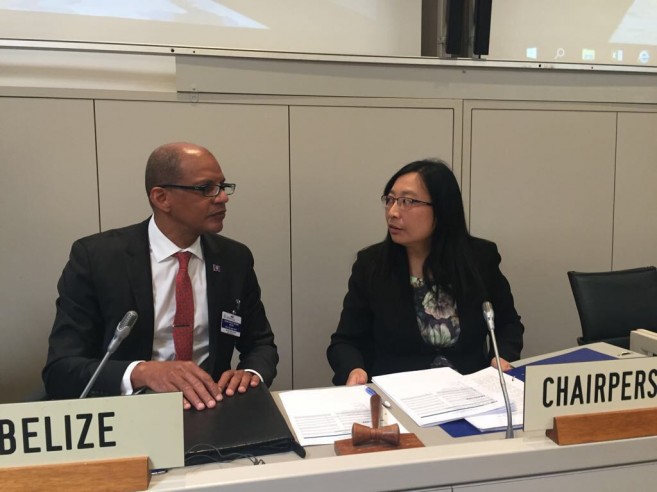 In his opening remarks, Ambassador Vernon emphasized the substantial progress made by Belize towards implementation of WTO obligations, capacity development, and most notably in the area of International Trade Policy. He indicated that despite the challenges experienced over the last two years due to agricultural disease and financial difficulties, the shrimp, citrus and banana industries are on the rebound. He also noted that despite oil production plummeting to almost zero, the significant pressures posed by de-risking on Correspondent Banking relationships, all compounded by the damages from Hurricane Earl (2016), Belize’s Services Sector remains robust, contributing to more than 60% of growth domestic product with the Tourism Industry contributing as much as 39%.
Prior to the meeting in Geneva, the Belize delegation worked diligently to provide comprehensive responses to numerous questions and requests for clarifications to WTO members, which reduced the number of issues and concerns raised at the meeting. 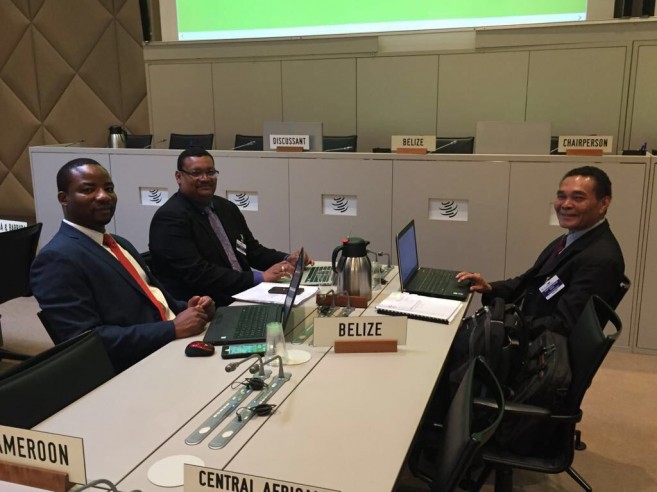 Ambassador Vernon assured members that Belize will continue with the Economic Reform Process that is currently underway, and will include the modernization of the legal and institutional framework in various sectors of governance. He cited examples such as the initiative being undertaken by the Central Bank to modernize the National Payment System, most notably the implementation of an Automated Payment and Securities Settlement System which interconnects Domestic Financial Institutions to facilitate large and small value payments, and the ongoing work toward the establishment of a National Credit Bureau System that will allow for greater efficiency in the distribution of credit in the Domestic Market. Ambassador Vernon reiterated the fact that Belize is fully compliant with its external debt obligations and that will strengthen its Trade and Investment Regime. 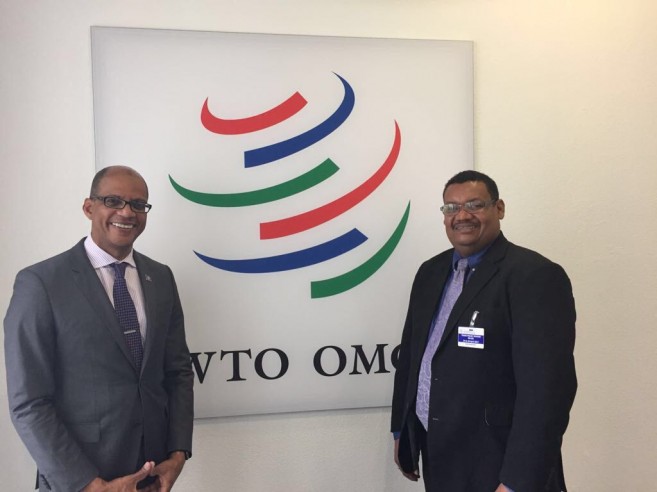 Belize is currently exploring possibilities for a Mission in Geneva to ensure adequate participation in the WTO process and to improve linkages and networking with the WTO Secretariat and other members. Ambassador Vernon also stated that Trade Facilitation is one of the key pillars in Belize’s Trade Policy Framework. Belize is currently working towards effective implementation of the WTO’s Trade Facilitation Agreement, which will significantly contribute to improving Belize’s “ease of doing business” ranking in the various indices for Trade Facilitation.
Belize reiterated its commitment to Policy Reforms and action in the Tourism Sector as provided for in the National Sustainable Tourism Master Plan. The Ambassador noted that to address security concerns, Belize’s Growth and Sustainable Development Strategy clearly identifies Improvement of Governance and Citizen Security as a critical success factor. This, combined with the new National Security and Defense Strategy, sets out a vision for 2020 that will address social issues that fuel crime. It will also ensure the protection and integrity of our national borders. 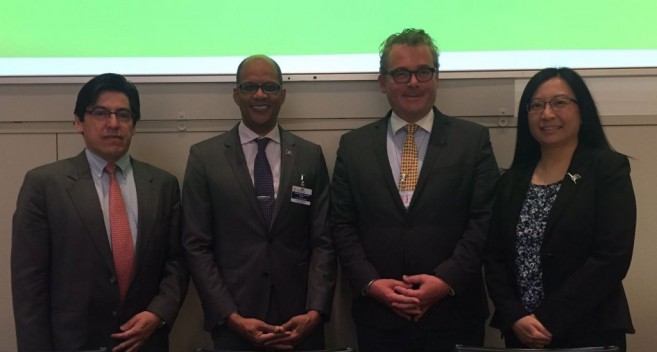 Ambassador Vernon indicated that Belize is working to diversify its economy away from its current over-dependence on the Agricultural Sector. This will be achieved through a sustainable balance between Domestic and Foreign Direct Investment, in line with the National Export Strategy and the Growth and Sustainable Development Strategy.
Belize concluded its presentations successfully, and was commended for the progress made, as well as the economic growth achieved since the last Trade Policy Review in 2010. Ambassador Vernon emphasized Belize’s intention to pursue its Trade Policy Development in the period ahead by comprehensively addressing the shortcomings identified.
Belize’s fourth Trade Policy Review will be due in seven years, in 2024, and the Directorate General for Foreign Trade will continue to lead implementation of Belize’s WTO commitments and the formulation of the National Trade Policy.