The recent plight of Mennonite soybean farmers and Orange Walk potato farmers, unable to sell their produce in competition with cheaper imports, have highlighted the need for a comprehensive National Trade Policy.

To address this need, the Ministry of Investment Trade and Commerce launched the National Trade Policy 2019 – 2030 with a presentation to the Belize Chamber of Commerce and Industry and other interested parties, at the Ramada Princess Hotel in Belize City on Thursday morning, February 28th. 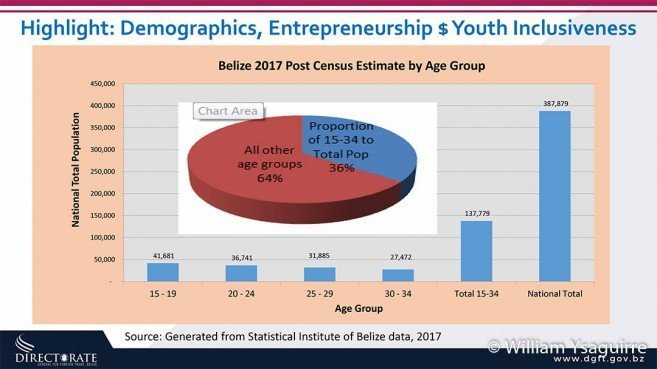 Minister of Trade Tracy Panton admitted the policy is long overdue, as it has been two years in development with partners in the private sector, the non- governmental organization and in consultation with both political parties. She said it is important to have a framework that guides trade development, and trade facilitation processes to be better respond shifts in global trade trends that affect the access and entry of Belizean goods and services to the global marketplace. 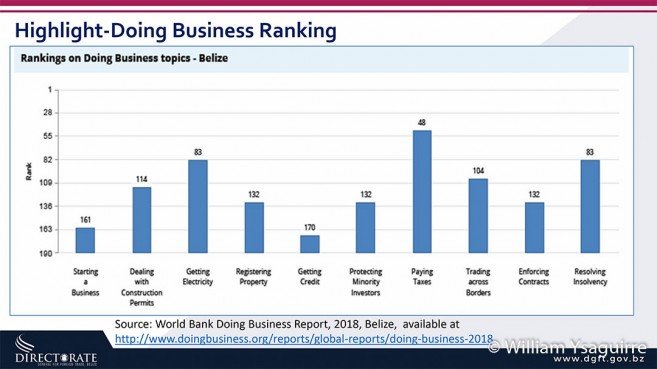 Panton said the ministry is now working on an action plan for how the policy will be implemented, taking into accounts stakeholders in the private sector. This first step will be to sensitize the relevant bodies so that the new policy will be integrated into future planning for trade development and future market access. She said the ultimate goal is to minimize our imports by having Belizean goods and services that can substitute for what we have on our shelves for Belizean consumption. 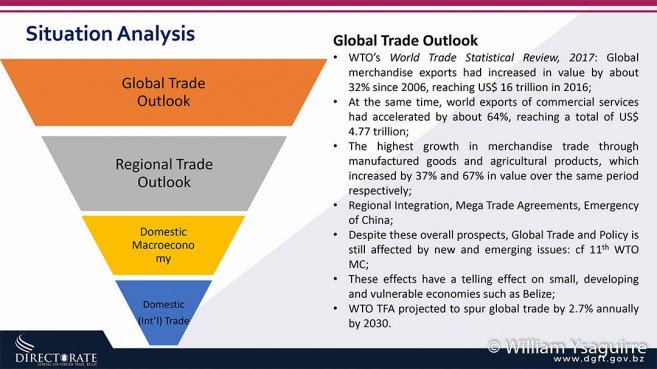 With Belize’s imports increasing by 12 percent over the past year, it has become ever more important to find ways to reduce our trade deficit or the imbalance between imports and exports. Panton said the objective is also to find areas where Belize products can have a competitive advantage in niche markets so that we can increase our exports and grow the national economy. For a while, Belize has relied on its traditional exports of raw agricultural products, but there is a growing demand for non-traditional products which Belize can also produce, such as industrial hemp, soybean oil and MASECA production from corn. There are many such value-added products for which there is such a demand, and for which the Ministry feels that Belize is well-poised to deliver to the international marketplace. 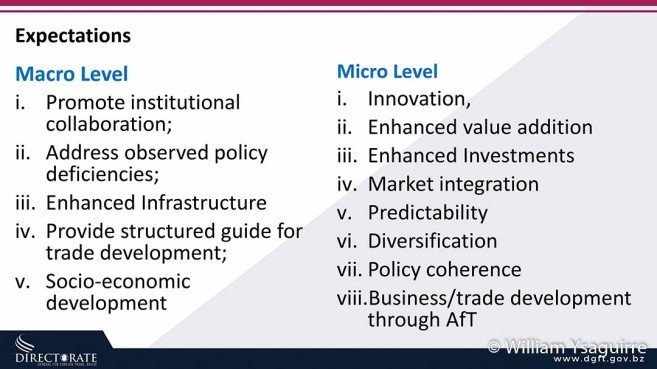 With Belize ranked at 121 in terms of our global ranking for the ease of doing business in Belize, it is also an integral part of the policy to take into account how government reduces the costs of inputs into Belizean made goods and services for export. Minister Panton said the government hopes this new approach will attract more foreign investment in the country’s productive sector. 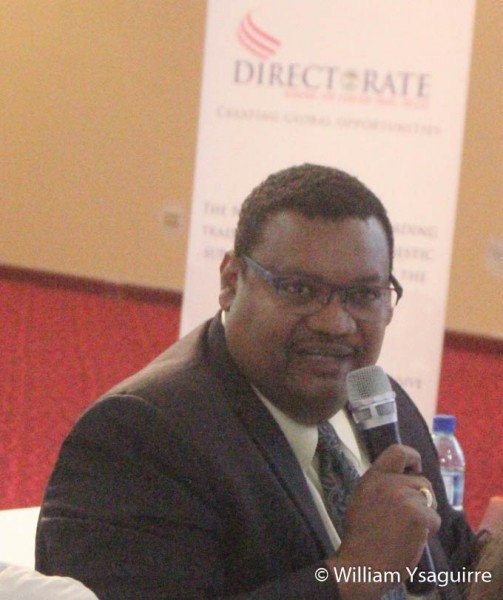 Belize has also entered into the process of regional economic integration the CARICOM Single Market Economy, and currently enjoys a trade surplus with CARICOM. Notwithstanding the exports of Belizean beans and rice to CARICOM, other Belizean products such as direct consumption plantain white sugar from ASR Belize Sugar Industries Ltd have encountered many non-tariff obstacles to enter CSME markets. It is crucial that the new policy overcomes these restrictions, as Belize must conform to the World Trade Organization guidelines, and Belizean sugar no longer enjoys preferential quotas and prices into such markets as the European Union. In the face of this sea change which occurred in 2017, Belize Sugar Industries has invested heavily in upgrading its plant to produce direct consumption sugars, through a USD$15 Million loan from the Inter-American Development Bank (IDB), and the key to increased profitability is the entry of Belizean sugar into non-traditional markets such as the CSME, where there is a significant demand for sugar, presently filled by imports from outside the region, that Belize could supply. 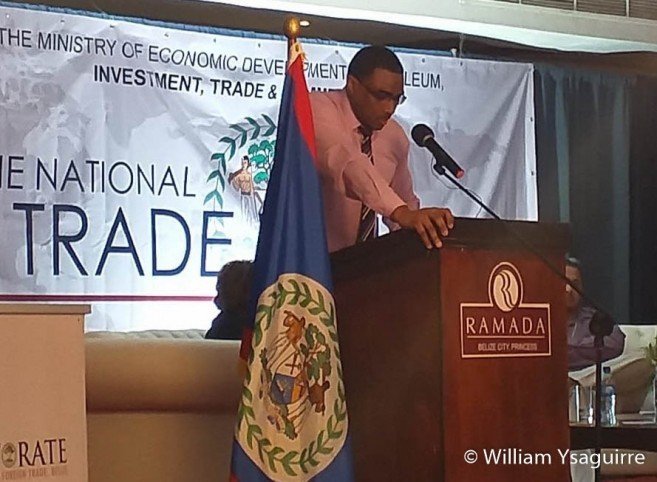 Panton admitted that this is a huge, on-going discussion in CSME forums, and Belize is leading these discussions, although other sugar-producing territories such as Guyana, Barbados, and Trinidad are also on-board moving the program forward to protect sugar producers within the region. The issue will be on the agenda at the next COTED meeting in April, as the CSME members will review the Common External Tariff CET as to how it affects sugar imports. 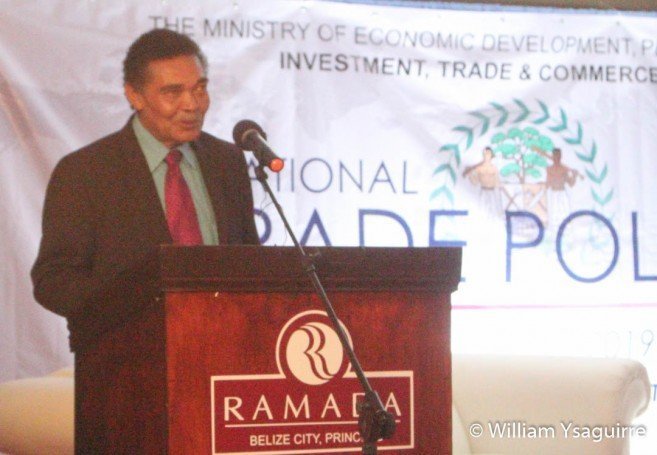 As the policy was developed, it was found that Belize’s exports to CARICOM have not lived up to expectations, and intra-regional trade has not grown, despite the tariff liberalization, national trade adviser Terrence Simfukwe noted; as he presented an overview of the policy. The trade in services is rising but is largely undocumented because there is no administrative and monitoring mechanism. Infrastructure remains inadequate and is still developing; the industrial base is low or totally absent.
The services sector has become a game changer for the Belizean economy, earning 60% of Belize’s Gross Domestic Product (GDP) in 2017, and the policy provides for facilitating trade with CARICOM, the United States, the European Union, Central American and Mexico. But for Belizean products to have market access, they must comply with foreign standards, and the Directorate is working to bring local producers up to speed in this regard. Belize has invested in the upgrade of the National Quality Infrastructure. The Directorate has sought to educate the business community about trade agreements, and the new opportunities that have opened up by providing market intelligence on specific regulatory requirements in these export markets, such as packaging and labeling, standards for food safety certification, and the assessment of domestic and export market structures. The policy includes plans to enhance the logistics and distribution systems. 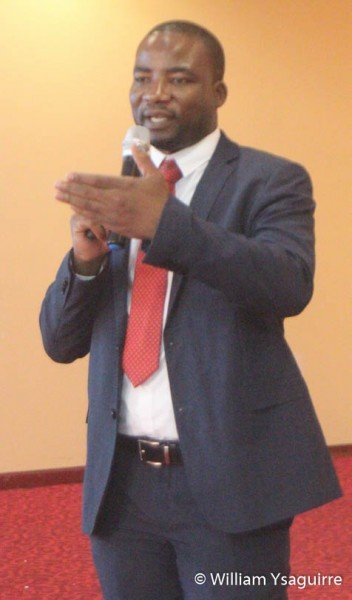 The policy also factors in the demographics of Belize’s youth, 14-34, who represent 36 percent of the population. As Belize seeks to exploit the latest developments in Information and Communications Technology (ICT) to expand the export of services such as business processes out-sourcing, such as call centers; it is equally important that the policy is gender-neutral and inclusive of persons with disabilities. The development of these new products and services, particularly new software apps, requires investment in research. The new trade policy must also take into account how these developments will impact the environment, and how environmental changes will impact the direction we want to go.

Multi-million-dollar cruise terminal to be built near Belize City