Over the weekend, nurses at the Southern Regional Hospital in Dangriga Town walked out of their posts in protest for better working conditions, adequate salaries, and compensation. The demonstration was not isolated to Dangriga. On Monday, August 29th, nurses and doctors from the Capital City of Belmopan, San Ignacio Town, Belize City, and Corozal Town in the north of the country joined the demonstration. Minister of Health and Wellness Honourable Kevin Bernard and his team held an emergency meeting in Belmopan with leaders of the Nurses Association of Belize (NAB). After two hours of discussion, they agreed on several suggestions, and Bernard said the situation was resolved. 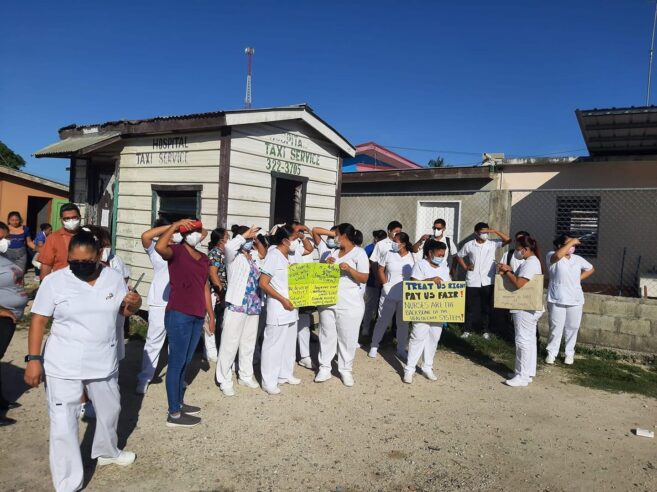 Bernard’s team included representatives of the Ministries of Labour and Finance. The NAB and the MOHW came to an agreement that will address specific demands. They agreed that overtime payments would be calculated monthly instead of weekly, and this month’s short hour deductions will revert to all staff as an interest-free advance to be paid before September 9th.
Discrepancy reconciliation will be conducted in the next pay period, and the tool calculation of sick and vacation leave will be standardized. The last option agreed upon was on the Public Service Regulations and Government Worker Regulation; the system that reflects the regulations for shift workers will be reviewed and amended.

According to reports from the meeting, the NAB will inform its members of the results of the discussions. At the same time, Honourable Kevin Bernard reiterated his appreciation for the nurses and medical personnel, acknowledged their sacrifices, and stressed that they never intended to deprive the nurses of what was due to them. “We have been working with the Ministry of Finance to work out the issues resulting from its June circular, and I’m happy that we were able to successfully reconcile those at the meeting this morning,” said Bernard. 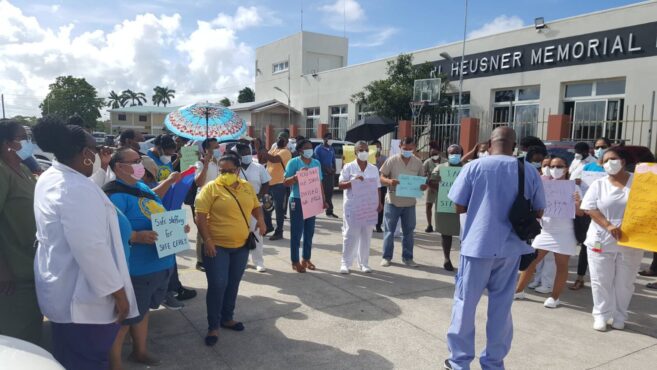 NAB’s President, Nurse Renita Pop, said she was pleased that in the future, nurses will get their just due as it relates to their overtime compensation. In the meantime, MOHW has agreed to continue meeting with them to address other pressing issues affecting the medical community.