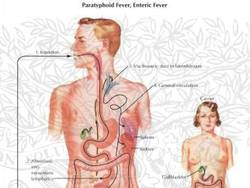 On February 15th it was reported to San Pedro Health Inspector Ms. Tillet that a San Pedro resident had tested positive for Typhoid fever (Salmonella enterica enterica). Upon notification Ms. Tillet contacted local doctors in the area and confirmed that they had treated a total of four cases in the last three months. The cases included a tourist visiting the island, a nine year old resident who was unavailable for a health interview and two Ex-Patriots who provided profile information to the Inspector. Without finding a common link to shared eating establishments, Tillet proceeded with testing open-water samples in the area and positively found some of them to be contaminated with human fecal matter, which is a key factor in spreading the contagious diseases. Tillet also confirmed that the four positive cases were based on the blood samples submitted to private labs. In an interview with Ms. Tillet, The SPSun learned that the Center for Disease Control and Prevention (CDC) does not consider this type of blood test to be completely accurate and bases positive identification of the Salmonella enterica enterica strain through stool samples of the afflicted. Tillet went on to explain that although they cannot confirm or dispel that the blood tests were inaccurate, the patients needed to be re-tested through a stool sample. Considering the patients had already completed a series of medication it was not possible to confirm if they had indeed suffered from Typhoid fever or a similar strain of salmonella.

On February 24th the Health Department collected blood samples and stool samples from one of the first four patients and seven new patients who were demonstrating symptoms. According to Tillet two other patients who had been tested positive through blood tests could not be tested that day as they were undergoing medicinal treatment and would be tested a week after their treatment was complete. Tillet went on to explain that home inspections were conducted at some of places and eight food establishments that some of the patients had in common were inspected as well. All locations were deemed clear of the disease. According to Tillet the blood and stool tests conducted on February 24th all came back negative for the Typhoid strain but were positive for other strains of salmonella.

There are more than 2,000 varieties of salmonella bacteria, but only about a dozen of them cause illnesses in people. Most of these illnesses can be classified as gastroenteritis, often featuring severe diarrhea. But a few varieties of salmonella bacteria result in Typhoid fever, a sometimes deadly disease that is more common in developing countries. Salmonella-induced gastroenteritis is most often caused by eating raw or undercooked meat, poultry, eggs or egg products. The incubation period ranges from several hours to two days. Signs and symptoms may include; nausea, vomiting, abdominal pain, diarrhea, fever, chills, headache, muscle pains and blood in the stool.

Typhoid fever is transmitted by the ingestion of food or water contaminated with the feces of an infected person. The gestation period ranges from five to 21 days following infection. Signs and symptoms may include; diarrhea or constipation, fever over 102 F (38.8 C), slightly raised, rose-colored spots on the upper chest, cough, mental confusion, a slowing heartbeat and enlarged liver and spleen.

Flying insects feeding on feces may occasionally transfer the Typhoid bacteria through poor hygiene habits and public sanitation conditions. A person may become an asymptomatic carrier of typhoid fever, suffering no symptoms, but capable of infecting others. According to the CDC approximately 5% of people who contract Typhoid continue to carry the disease after they recover.

Sanitation and hygiene are the critical measures that can be taken to prevent Typhoid. Typhoid does not affect animals and therefore transmission is only from human to human. Typhoid can only spread in environments where human feces or urine are able to come into contact with food or drinking water. Careful food preparation and washing of hands are crucial to preventing Typhoid. There are two vaccines currently recommended by the World Health Organization for the prevention of Typhoid and both are considered to be 50% to 80% protective.

Anyone who is suffering from these symptoms are urged to seek treatment at the San Pedro Polyclinic and doctors who suspect or confirm positive Typhoid tests are asked to please contact the San Pedro Health Inspector, Ms. Tillet at 226-2555.

Persons living with Diabetes to benefit from Regional Study-based Project