The National AIDS Commission (NAC) Country Coordinating Mechanism (CCM) Island Committee was formally inducted during a luncheon ceremony held at El Divino Restaurant on Thursday, August 2nd. The purpose of the luncheon was twofold. Primarily as a show of gratitude to the various businesses and organizations that have come onboard in allowing staff members to form a part of the Island Committee. The second purpose of the luncheon was to induct and present the new Committee members. 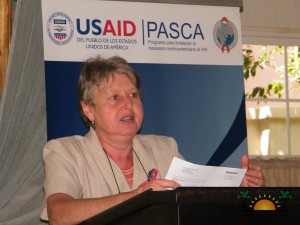 The new Island Committee, an arm of the National Aids Commission (NAC), so named as it is tasked with coordinating the local aspect of the National Response to HIV/AIDS in both Caye Caulker and San Pedro; is hard at work on an action plan that will address the particular needs of the islands.

The Overall Goal of the NAC and as such the Island Committee is that: “By the end of 2016, Belize has halted and began to reverse the HIV incidence rates among young people, men who have sex with men and sex workers. By 2016, the AIDS-related deaths, especially among men living with HIV in Belize, will have decreased by 30%. By 2016 systems will be in place to fully understand the essential features of the epidemic in Belize. By 2116 Belize will have significantly reduced discrimination against persons vulnerable to HIV.” 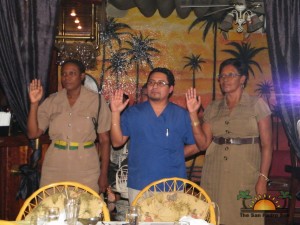 Locally the committee will start by targeting three specific goals: Ending new HIV Infections; Improving Health and Wellbeing of persons living with HIV; and Creating an Enabling Environment. How does the committee hope to accomplish this? By working very closely with other NGOs throughout the country who are already working in the HIV field. Instead of trying to ‘re-invent the wheel they plan to simply work with these organizations to bring their much needed services (which are already available in other parts of the country) to San Pedro and Caye Caulker.

In their effort to end new HIV infections the committee’s principal strategies will provide for age appropriate health and family life education programs delivered in all education institutions. There will also be targeted social and behavior change initiatives to address high risk sexual behavior among young people ages 15 –29, men who have sex with men, sex workers, prisoners, persons with disabilities, migrants and persons living with HIV.  The strengthening of safe-sex negotiation skills, particularly among girls and women will be addressed along with an increased number of HIV prevention initiatives that will focus on the greater involvement of males in the HIV response. These are just a few specific objectives and goals that the new Island Committee have identified and set forth to work on.

The Committee plans on working with the schools, businesses, night clubs, resorts and churches as well as any other groups willing to join in the fight to. Together, the aim is to promote accurate information to discourage new infections while educating and sensitizing the general public about the disease so as to decrease the stigma and discrimination that comes along with an HIV positive diagnosis.

The committee already has many friends; who are persons willing to help out in anyway necessary. Friends of NAC/CCM Island Committee include: Susana Eiley, Owen Vellos, Laurie Norton, Alberto Villanueva, Germain Arana, Esner Vellos and Mr. Adan Kay Human Development. The Committee joins the NAC in extending a much deserved “Thank You” to the following establishments and persons that have allowed their staff’s participation in the committee: Melinda Guerera, Central Health Regional Manager; Tamara and Ron Sniffin of The San Pedro Sun Newspaper; Miriam Codd, District Education Officer for San Pedro and Caye Caulker, and Mayor Daniel Guerero along with the San Pedro Town Council. The committee meets the first Thursday of every month at 5PM at the conference room at the Dr. Otto Rodriguez PolyClinic II.

HIV/AIDS is a disease that does not have a target group. ANYONE can be affected by it. While HIV/AIDS is a reality and a growing concern in Belize, these efforts are very good news. Belize is one of the few countries in the world that does provide ARV (Anti Retro Virals) medications at no cost to persons living with HIV. Also, testing for the virus is offered at community clinics across the country.