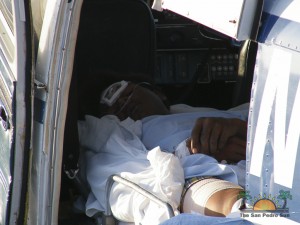 Simon Velasquez being flown to Belize City for X-Ray Examination

Some time around 3:45PM on Wednesday March 14, 2012, 21-year-old Simon Velasquez of a Boca del Rio address was shot by police in the San Juan Area of San Pedro Town. According to Police, Velasquez was involved in a series of fights since 1PM of the same date. According to SP Police, they received multiple complaints and responded on several occasions, but Velasquez was never around until they responded to a 3:30PM report.

Police state that they saw Velasquez, and upon his seeing the officers, he allegedly ran away, with the police setting chase. Velasquez apparently jumped two fences and made his way to an overgrown empty lot in the San Juan Area along the lagoon. Two officers pursued him on foot and found him hiding. According to Police, when the officers came near, Velasquez pulled out a stick and charged at one of the officers.

The officers reported that they asked Velasquez to drop the stick and surrender, but he allegedly refused, and came nearer. One officer pulled out his Police-issue revolver and fired a single shot, catching Velasquez in the upper right thigh area. The bullet entered the front portion of his thigh and exited through the back. At that point, Velasquez was subdued, apprehended and taken to the Dr. Otto Rodriguez PolyClinic II for treatment. He is listed in a stable condition, but will be transferred for further medical attention in Belize City.

Velasquez is no stranger to police, as he was wanted for an aggravated burglary and was on the run. As in any case involving a police shooting, an internal investigation is being conducted. Police investigation continues into this incident.

New Cemetery in the Horizon for SP10 Photos