SPTC hands over radios to Police 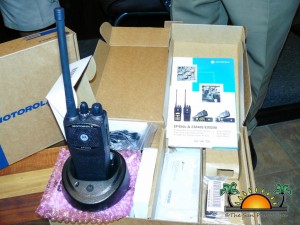 Hon. Heredia Jr. handed over the radios, stating that the he hopes the radio makes the work of the police a little better. At hand to receive the donation was the Deputy Officer in Charge of the San Pedro Police Department, Inspector Reynaldo Pook. Inspector Pook took the opportunity to thank the SPTC and Minister Heredia for his constant support to the San Pedro Police Department.

Also present at the handing over ceremony was Mayor of San Pedro Town Daniel Guerrero and Councilor Gaby Nuñez. Earlier in the month, the San Pedro Traffic Department was given a similar donation. Heredia told The San Pedro Sun that the two donations totaled $12,000 and was intended to assist the two departments in enhancing their communications system.

Police houses still not relocated 70 days after SPTC committed to do so; new barracks building near completion