On Friday, March 18th at around 8:29PM, San Pedro Quick Response Team personnel’s conducted a search in an empty lot located in the Boca Del Rio Area, San Pedro Town, which led to a black plastic bag in a garbage pile containing green leafy vegetable substance suspected to be Cannabis, amounting to 70.4 grams. The suspected drug was transported to the San Pedro Police station where it was labelled and deposited as found property.
Found Firearm

On Monday, March 21st the San Pedro Police responded to a report of a fight in the Boca Del Rio Park Area. Upon arriving at location two young men, one of Creole descent and one of Hispanic descent, who were involved in said fight, ran over the Boca Del Rio Bridge and managed to escape police apprehension. Upon searching the immediate area where one of the male persons were last seen with what appeared to be a firearm, police discovered a chrome 380 pistol with black handle, Walther Brand, serial number unknown, with a magazine containing three 380 Auto rounds. The firearm and ammunition was taken to the station and was labelled found property.
Drug Trafficking 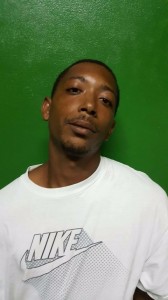 On Tuesday, March 22nd around 6:15PM acting on information received San Pedro QRT Personnel’s conducted search on 24-year-old Jovanie, Belizean Construction Worker of Bayside Area, San Pedro Town who was carrying a red gift bag in his hand leaving the Tropic Air Cargo Section which is located on Sea Star Street, San Pedro Town. Search conducted inside the red gift bag led to the discovery of a transparent plastic bag containing green leafy vegetable like substance suspected to be Cannabis, amounting to 61.2 grams. He was formally arrested and charged for Drugs Trafficking.