Hon. Francis Fonseca will be the next Party Leader of the People’s United Party (PUP) and Leader of the Queen’s Loyal Opposition in the National Assembly. The announcement was made shortly after midday today Thursday October 20, 2011, following a meeting with representatives from all 31 divisions. 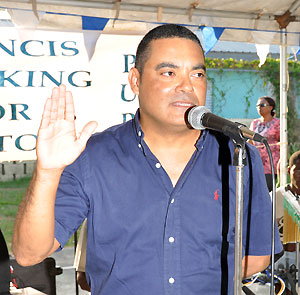 It’s an eleventh hour decision taken by Fonseca following his nomination late yesterday. In his statement, Fonseca told the press that he was called upon by several members of the Party including the Price family to take the mantle of Leadership of the PUP.

It’s a dramatic, 180 degree turn from where the PUP left off late yesterday after a press briefing where Arthur Saldivar, Julius Espat and Mike Espat were nominated for the Leadership Post. Fonseca said that during the meeting this morning, all three candidates decided to decline nomination, withdrew their application and pledged their support to him (Fonseca) as leader of the PUP.

Fonseca, who is the Area Representative for Freetown Division and the cousin of Ralph Fonseca, challenged Hon. John Briceño in 2008 but narrowly lost. Francis Fonseca’s Party Leadership position will be ratified in a meeting of the National Party Council later this month.

Professor Duke Pollard sworn in as new Justice of Appeal