The three all-terrain vehicles and the tractor were purchased by the Government of Belize and will be assigned to the Infantry Battalions of the BDF which are responsible for border patrols. 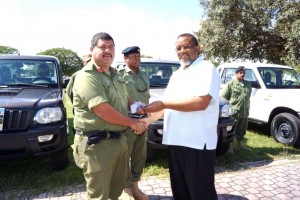 Addressing the local media, Hon John Saldivar stated, “”It came about as the result of some of the needs that were expressed to me very early on when I took over the Ministry of National Security. The BDF is in need of several vehicles so that they can get around the country better, so that they can patrol our borders better; and this is only the beginning. Within another 2 months, we should be getting hopefully another 7 vehicles for them, and after that, I believe we’ll be properly able to mobilize around the country.”

Receiving the vehicles and tractor on behalf of the Belize Defence Force was Brigadier General Dario Tapia, Commander of the BDF. The handover ceremony took place at the BDF Headquarters, Price Barracks, Ladyville.

Elections and Boundaries Department classifies on Representation of the People Act