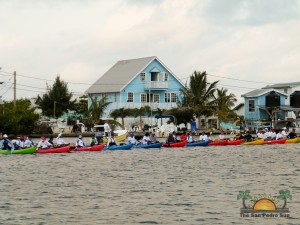 Twenty seven teams took off from the “Embarcadero” area of San Pedro to take on the 8th Annual Lagoon Reef Eco-Challenge on May 12th. Both junior and senior kayakers alike took to the creeks and waves of Ambergris Caye for their chance to claim the coveted prize and bragging rights of what has quickly become the most popular sporting event on the island. The 42 mile long race took them along the banks of the lagoon at the back of Ambergris Caye, through thick mangrove wetlands and winding creek pathways all the way north to the border between Mexico and Belize, snaking their way through the small channel separating the two countries, just a few feet apart, and then pinning the teams against wave after wave of Caribbean Sea along the Ambergris Caye shoreline as they sprinted to the finish at the Central Park in San Pedro Town on May 13th. 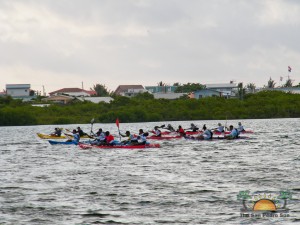 At the end of the race, and after all times were recorded and verified, Team #13, 2 Horse Power Yamaha, was crowned the overall winner of the 2012 Eco-Challenge Kayak Race. 2 Horse Power Yamaha team members Douglas Penland and Fernando Giacoman crossed the finish line with a total combined time of 9 hours, 53 minutes and 57 seconds in a race that was fought tightly among the top three teams. Team #2, Southwind Boys, Jimmy Polonio and Carlos Ramirez, led the first leg of the race for the majority of the first day and only narrowly lost out at end by 9 seconds as Penland and Giacoman edged past them moments before the finish. Third Place Team Coast Guard, #23, Tony Franzva and Karl Borland, gave both 1st and 2nd Place finishers a tough challenge, managing to stick with them the entire race and at moments looked to take one of the top two places themselves.

It proved to be a tough race for many of the kayakers and on the second day, only 16 of the 27 teams that started the race took off from the Basil Jones area of north Ambergris Caye to fight for the win. Strong waves and sweltering heat made it a hard fought battle and the kayakers gave their all in an exciting and grueling race.

In the Junior category, top place finishers, #5 Blue Ridder Boys, Daniel Gregorio and Mario Chimal, were the first to cross the finish line on day two in a surprise finish that saw them beat out all the other teams by over a minute, but had a total 2-day time that saw them take 8th place overall, ahead of three of the senior competitors. Their total time was an impressive 10 hours, 45 minutes and 3 seconds. Rounding out the top three places in the Junior category were team #3, Con Todo, who took second place, and team Oceana Boys, #25, who finished third.

Now we look forward to a new Kayak Race coming next month by the same organizers of the Lagoon Reef Eco-Challenge, The Eco-Pro Kayak Race. Slated for the 23rd and 24th of June the Eco-Pro Kayak Race will see major competitors from all over the country as well as some international kayakers completely circling the island in a 60 plus mile race with more challenges and much larger prizes on the line. 1st Place kayakers will be able to win a whopping $10,000 prize for taking on the challenge of this much larger and longer race around Ambergris Caye. Pro Kayakers… start practicing!

On another note, Eric Donis, the young athlete who planned to swim from San Pedro to Belize City in the Healthy Reefs, Healthy People Swim Challenge, did take to the waters to swim, but instead swam from Caye Caulker to San Pedro. Eric and four other swimmers were awarded certificates of completion and appreciation for their efforts in the swim challenge and for doing their part to bring awareness for our delicate reef and marine eco-systems.

The San Pedro Sun would like to congratulate all the kayakers for taking part in this year’s competition and thank all of the sponsors who gave to this worthy cause. We look forward to next year’s race being even bigger and better. Kayakers, start practicing from now!

New San Pedro Justices of the Peace sworn in13 Photos