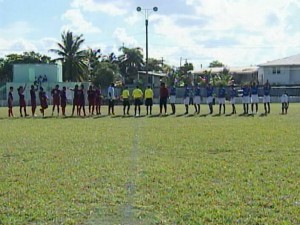 The San Pedro Seadoggs are back in the Belize Premiere League Competition and scheduled to go up against Belize Defense Force on Sunday September 9th at the Norman Broaster Stadium in San Ignacio, Cayo.
According to coach Billy Leslie, the team played two games the past two Sundays. In the first game played on August 26th against San Felipe Barcelona, the Seadoggs won in a game of three to one. Following this, the team travelled to Belize City for a home game, played at the MCC Grounds (as the Ambergris Stadium was not fit to play national games) on Sunday September 2nd where they drew in a game of nil-nil.
The purpose of the league is threefold and offers opportunities to participants to compete internationally, all depending on their performance during the tournament. From the tournament, the top four contenders will move on to represent Belize in two international football competitions: the CONCACAF (Confederation of North, Central American and Caribbean Association Football) and the UNCAF (Union Centroamericana de Futbol). Thirdly, throughout the tournament, scouts will be looking at individual players to choose from to form a national selection to represent Belize in the Nations Cup. These games start as early as January 2013.
The San Pedro Seadoggs are holding a baked chicken with potato casserole with cut green beans and cream of mushroom lunch sale fund raiser at Susana Eiley’s residence on Friday September 7th from 10AM until sold out. Platters will be sold at $10 per plate. Donations are welcomed and delivery is available. Please come out and support the Seadoggs. Tickets are available with team players or at El Fogon. For tickets, delivery or to learn how you can help the team, contact Susana Eiley at 662-2121.
The Seadoggs take this opportunity to thank the following individuals that continue to show support for the sport and the team: Belize Tourism Board, Southwind Properties, Captain Sharks, Doug Pennell, Cholos, Jim and Jamilla Janmohammed, Emma and Regina, Mr. and Mrs. Saldivar and everyone who has assisted with the team in other ways. The San Pedro Sun wishes the team much luck in their upcoming games.