The Mayor’s and Minister’s Cup came to a contentious end on Saturday, April 16th in a final match between Team Catrachos and Team Veterans. Both clashed on the field at the Honourable Louis Sylvester Sporting complex, where after an intense match, the Veterans forfeited the game. With a final score of 4-3, Team Catrachos was crowned the 2016 Mayor’s and Minister’s Cup champions.

The gates opened at 6PM, with many fans filling the complex to watch the most anticipated match of the season. After four months of intense competition, only one team would walk away with the coveted title as champions and that evening, the competition was on and hotter than ever.

Shortly after 7PM, after a short ceremony introducing the teams, and after the National Anthem was sung, the ball began rolling on the field. The cheer of fans was deafening as each team attempted to score a goal.
By the end of the first half, Veterans were ahead of the game with a solid lead of 2-0. Their many years of experience in the sport showed, and they were in control of the game. At half-time, a disappointed Catrachos Team walked off the field to re-group.

While the San Pedro Dance Company entertained fans with a few dance numbers, both teams strategized.
In the second half of the game, Veterans continued controlling the game, not letting the Catrachos score. However, on the 29th minute of the second half, Catrachos found an opening and scored, following with another goal a mere three minutes after. The game was tied at 2-2.

The sporting arena was vibrating with loud fans demanding more action from both teams. Exactly two minutes after Catrachos tied the game, they found another opportunity, taking the 3-2 lead. Fans were ecstatic with the change of pace, while the Veterans struggled to regain momentum.
The game’s end drew near when Catrachos scored another goal. Everyone thought the game was done for the Veterans, but experience kicked in, and they scored a third goal. The pressure was on for another goal, and in the last minutes of the match, it was almost sudden death for both teams.

In the last few minutes of the game, the Veterans had a golden opportunity with a free-kick shot. A player in front of the goalkeeper slammed a goal into the left corner of the goal post, and fans and players alike celebrated the game tier. But the celebration was short-lived, as the line man advised the referee that the score did not count: one of the Veteran’s players was offside.
Angry fans charged at the game’s officials, creating a chaotic situation and police had to intervene. Security forces quickly brought order at the field, while the captains of the teams and the officials of the tournament had a discussion. Some spectators argued that there was no offside, while others were confident that it was. Only the officials could try solving such a dilemma. In the end it was decided that the goal was not valid and the offside call would stand. 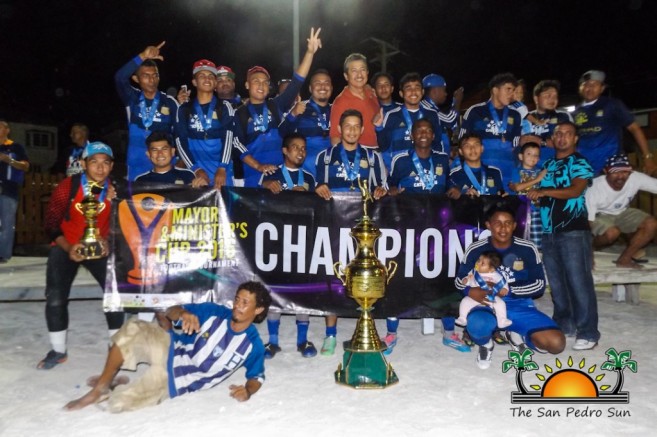 With Catrachos still leading the game by one goal, the Veterans declared that they would walk off the field, forfeiting the game. Catrachos were then pronounced winners of the tournament.
Immediately after the controversial ending the various players and teams were respectively awarded. Before the awards were handed out, Mayor Daniel Guerrero congratulated each team for their participation in the tournament. He also encouraged the young players that were present to continue involving themselves in sports.
Eiden Salazar of Reef Radio announced the different awards. The San Pedro Junior College was awarded with a trophy for best conduct and always abiding by the tournament’s rules. Next, the “Pichichi” or the golden boot for the player with the most goals, was awarded to Rondel Martinez from Peace Makers team. Next, the award for the “Most Valuable Player” (MVP) of the tournament went to Nestor Heredia, followed by the award for best goalkeeper of the season, Isaul Coba of Team Catrachos.
After the individual awards, the winning teams were given their trophies. In third place was Team Ambergris Divers, who defeated Team Peace Makers the day before. A side from their third place trophy, they also received a cash prize of $500. Second place went to Team Veterans, who received a cash prize of $1,000. Taking first place trophy and a cash prize of $2,000 was the winning team of Catrachos, who celebrated with their fans.

After the award ceremony, organizers announced the newest sporting tournament underway. ‘Mundialito,’ set to target the young islanders, the tournament will be an excellent round of games.
The San Pedro Sun joins the community in congratulating Team Catrachos as champions of the Mayor’s and Minister’s Cup 2016.