In speaking at the event, Director of Civil Aviation Jose Contreras explained that the day is geared to raise awareness on the importance of aviation in Belize. “This day is celebrated annually on 7th December to mark the creation of the International Civil Aviation Organization in 1944,” said Contreras. Belize has been a contracting state of ICAO since 1991. In speaking to The San Pedro Sun, Contreras said, “The event is also set to enhance the rapport between members of the aviation community and also serves to promote and enhance aviation safety and enhance public awareness on the importance of aviation safety in Belize.”

In the absence of the Minister of Civil Aviation Hon. Manuel Heredia, his CEO Lindsay Garbutt explained, “We are committed to creating a conducive environment for the development of an air transport industry that is sustainable, meets the needs of the customers, improves the level of service and reduces costs while being safe efficient and internationally competitive.” 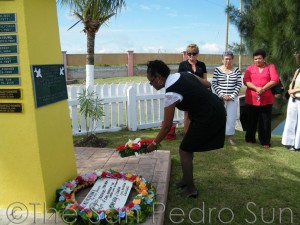 Following the official ceremonies, the gathering moved to the Belize City Municipal Airstrip where a wreath laying ceremony took place. During the ceremony, two new names were added to Pilot Memorial Monument dedicated to Captain Luis Rene Tam. The two names added were that of Captain Nigel Donald Flowes who died in November of 2009 and Sir Barry Manfield Bowen who died in February of 2010. A prayer was offered and a moment of silent was observed in memory of all the fallen pilots after which family members of the deceased Belizean pilots had the opportunity to share some reflection on the life of their relatives.

Immediately after the wreath laying ceremony, the Department of Civil Aviation hosted an open day where local and international airlines participated. International Civil Aviation Day was observed under the theme, “Assistance and Cooperation for Globally Sustainable Air Transportation.”

How to Vote in The People’s Referendum9 Photos